Years of Rice and Salt 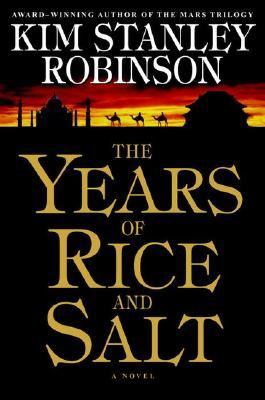 Chapter 1 Another journey west, Bold and Psin find an empty land; Temur is displeased, and the chapter has a stormy end. Monkey never dies. He keeps coming back to help us in times of trouble, just as he helped Tripitaka through the dangers of the first journey to the west, to bring Buddhism from India to China. Now he had taken on the form of a small Mongol named Bold Bardash, horseman in the army of Temur the Lame. Son of a Tibetan salt trader and a Mongol innkeeper and spirit woman, and thus a traveler from before the day of his birth, up and down and back and forth, over mountains and rivers, across deserts and steppes, crisscrossing always the heartland of the world. At the time of our story he was already old: square face, bent nose, gray plaited hair, four chin whiskers for a beard. He knew this would be Temur's last campaign, and wondered if it would be his too. One day scouting ahead of the army, a small group of them rode out of dark hills at dusk. Bold was getting skittish at the quiet. Of course it was not truly quiet, forests were always noisy compared to the steppe; there was a big river ahead, spilling its sounds through the wind in the trees; but something was missing. Birdsong perhaps, or some other sound Bold could not quite identify. The horses snickered as the men kneed them on. It did not help that the weather was changing, long mare's tails wisping orange in the highest part of the sky, wind gusting up, air damp--a storm rolling in from the west. Under the big sky of the steppe it would have been obvious. Here in the forested hills there was less sky to be seen, and the winds were fluky, but the signs were still there. They ride by fields that lay rank with unharvested crops. Barley fallen over itself, Apple trees with apples dry in the branches, Or black on the ground. No cart tracks or hoofprints or footprints In the dust of the road. Sun sets, The gibbous moon misshapen overhead. Owl dips over field. A sudden gust: How big the world seems in a wind. Horses are tense, Monkey too. They came to an empty bridge and crossed it, hooves thwocking the planks. Now they came on some wooden buildings with thatched roofs. But no fires, no lantern light. They moved on. More buildings appeared through the trees, but still no people. The dark land was empty. Psin urged them on, and more buildings stood on each side of the widening road. They followed a turn out of the hills onto a plain, and before them lay a black silent city. No lights, no voices; only the wind, rubbing branches together over sheeting surfaces of the big black flowing river. The city was empty. Of course we are reborn many times. We fill our bodies like air in bubbles, and when the bubbles pop we puff away into the bardo, wandering until we are blown into some new life, somewhere back in the world. This knowledge had often been a comfort to Bold as he stumbled exhausted over battlefields in the aftermath, the ground littered with broken bodies like empty coats. But it was different to come on a town where there had been no battle, and find everyone there already dead. Long dead; bodies dried; in the dusk and moonlight they could see the gleam of exposed bones, scattered by wolves and crows. Bold repeated the Heart Sutra to himself. "Form is emptiness, emptiness form. Gone, gone, gone beyond, gone altogether beyond. O, what an Awakening! All hail!" The horses stalled on the outskirts of the town. Aside from the cluck and hiss of the river, all was still. The squinted eye of the moon gleamed on dressed stone, there in the middle of all the wooden buildings. A very big stone building, among smaller stone buildings. Psin ordered them to put clothes over their faces, to avoid touching anything, to stay on their horses, and to keep the horses from touching anything but the ground with their hooves. SRobinson, Kim Stanley is the author of 'Years of Rice and Salt' with ISBN 9780553109207 and ISBN 0553109200.