What Remains A Memoir of Fate, Friendship, and Love 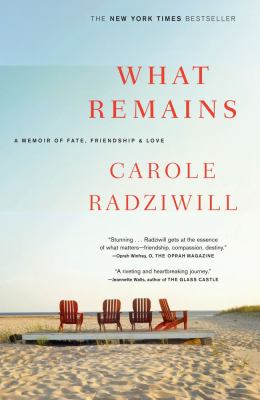 Prologue Friday, July 16, 1999 Three weeks before my husband died a young couple smashed their plane into the Atlantic Ocean, off the Massachusetts shoreline, well after the mid-July sun had set. It was reported in the news as 9:41, but I knew the general time, because I had spoken to the woman less than an hour before. The pilot was my husband's cousin, John Kennedy. His wife, Carolyn Bessette, was my closest friend. She was sitting behind him next to the only other passenger, her sister, Lauren. A still, hot summer day had melted into a warm and sticky night. A quiet night, unremarkable except for the fog, which rolls in and out of New England like a deep sigh. While we were still making plans, before they took off from Caldwell, New Jersey, she called me from the plane. "We'll fly to the Vineyard tomorrow, after the wedding. We can be there before dinner." It was a short conversation, because I was going to see her the next day. I was staying in her house, their house, on Martha's Vineyard, with my husband, and they were taking a simple trip. One they'd made many other weekends, from a small airport in New Jersey to the islands off Massachusetts -- a well-worn ninety-minute path up the coastline. I hung up the phone and opened the book I was reading and an hour later she was dead. Afterward I tried to find something to explain what had happened -- was it cloudy, were the stars out? But the night was ordinary. It usually is, I think, when your life changes. Most people aren't doing anything special when the carefully placed pieces of their life break apart. They flew a lot that summer, from the city to the Vineyard, and we called each other every day if we weren't together. "We're getting a late start. I'll call you in the morning." It takes seconds to plunge into an irrevocable spin in a small plane -- into what the Federal Aviation Administration calls agraveyard spiral.According to the accident report, the plane broke the surface of the ocean three minutes after the pilot sensed a problem. At 9:38, he made a curious turn. One hundred and eighty seconds later, the last thirty of them aimed directly at the water, their stories ended abruptly. I wonder if he felt the awkward motions of the plane in those minutes, the changes in speed or direction. It's likely he did not. If you close your eyes in an airplane, you don't feel up or down. You don't feel yourself tilting right or left. You don't feel anything, really, and your senses tell you it doesn't matter. Clouds were hiding the familiar strings of lights that paint the coastline. He might as well have been flying with his eyes closed. "I need to talk to you," I said. My husband, Anthony, was dying and we were all trying to pretend that he wasn't, that everything was fine. "I can't hear you, Lamb. I'll see you tomorrow, okay?" The accident report shows the pilot made a turn after passing Point Judith, Rhode Island -- he turned east, away from the coast, away from where he was going. And then another turn, and then another. It was puzzling to everyone, including the investigators, and after months of plotting radar signals, studying twisted pieces of wreckage, constructing maps and charts, and speculating about state of mind, they confirmed what they had suspected -- the pilot was disoriented. He may have turned, some suggested, hoping to spot something familiar. A landmark like the lighthouse at the tip of Gay Head, blinking a steady twenty-mile stream of light, muffled that night by thick, black air. He might have scanned the dark sky for Noman's Land -- the empty island you can see clearly in daylight from the beachfront of their Martha's Vineyard home. Perhaps he felt a slight tilt of the plane, but it was more likely that the instrument panel caught his attention, his compass shifting slowly. He may have trieRadziwill, Carole is the author of 'What Remains A Memoir of Fate, Friendship, and Love', published 2007 under ISBN 9780743277181 and ISBN 074327718X.