Weapons of Choice World War II With a Startling Twist 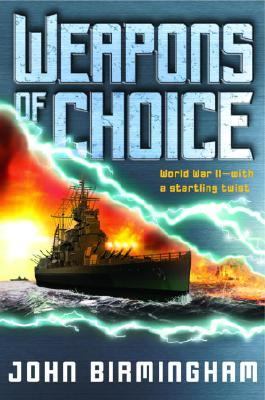 Chapter 1 East Timor, Zone Time: 0942 Hours, 15 January 2021 The Calihate spy, a Javanese carpenter known simply as Adil, resettled himself against a comfortable groove in the sandalwood tree. The small, shaded clearing in the hills overlooking Dili had been his home for three days. He shared it with an aged feral cat, which remained hidden throughout the day, and an irritable monkey, which occasionally tried to shit on his head. He had considered shooting the filthy animal, but his orders were explicit. He was to remain unnoticed as long as the crusaders were anchored off East Timor, observing their fleet and sending reports via microburst laser link, but only in the event of a "significant development." He had seen nothing "significant" in seventy-two hours. The infidel ships were lying so far offshore they were often lost in haze and distance. Only when night fell did he have any real chance of seeing them, and even then they remained little more than a blurred constellation of twinkling, faraway lights. Such was their arrogance they didn't bother to cloak themselves in darkness. Jets roared to and from the flight deck of their carrier twenty-four hours a day. In deepest night the fire of the launches appeared to Adil as though God Himself had lit a torch on the rim of the world. Occasionally a helicopter would appear from the direction of the flotilla, beginning as a small, indistinct dot in the hot gray sky, taking on recognizable form only as the muffled drone of its engines clarified into a thudding, growling roar. From his hiding spot Adil could almost make out the faces of the infidels in the cabins of the fat metal birds. American, British, French, they all looked alike, cruel and overfed, a thought that reminded him of his own hunger. He unwrapped the banana leaves from around a small rice cake, thanking Allah for the generosity of his masters. They had included a little dried fish in his rations for today, a rare treat. Sometimes, when the sun climbed directly overhead and beat down with a slow fury, Adil's thoughts wandered. He cursed his weakness and begged God for the strength to carry out his duty, but it was hard. He had fallen asleep more than once. Nothing ever seemed to happen. There was plenty of movement down in Dili, which was infested with crusader forces from all over the Christian world, but Dili wasn't his concern. His sole responsibility was to watch those ships that were hiding in the shimmering haze on the far horizon. Still, Adil mused, it would be nice to know he had some real purpose here; that he had not been staked out like a goat on the side of a hill. Perhaps he was to be part of some elaborate strike on the Christians in town. Perhaps tonight the darkness would be torn asunder by holy fire as some martyr blew up one of their filthy taverns. But then, why leave him here on the side of this stupid hill, covered in monkey shit and tormented by ants? This wasn't how he had imagined jihad would be when he had graduated from the Madrasa in Bandung. USS Kandahar, 1014 Hours, 15 January 2021 The marines wouldn't have been surprised at all to discover that someone like Adil was watching over them. In fact, they assumed there were more than two hundred million pairs of eyes turned their way as they prepared to deploy into the Indonesian Archipelago. Nobody called it the Caliphate. Officially the United States still recognized it as the sovereign territory of Indonesia, seventeen thousand islands stretching from Banda Aceh, three hundred kilometers off the coast of Thailand, down to Timor, just north of Australia. The sea-lanes passing through those islands carried a third of the world's maritime trade, and officially they remained open to all traffic. The Indonesian government-in-exile said so-from the safety of the Grand Hyatt in Geneva where they had fled, three weeks earlier, after losing contrBirmingham, John is the author of 'Weapons of Choice World War II With a Startling Twist', published 2004 under ISBN 9780345457127 and ISBN 0345457129.