Voices from the Street 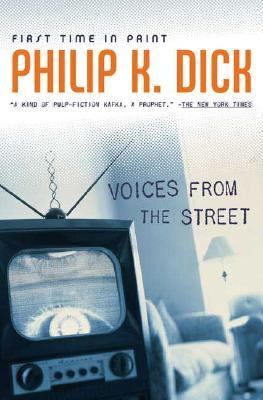 Part One Morning Thursday morning, June 5, 1952, came bright and hot. Moist sunlight lay over stores and streets. Glittering from the lawns, the cold sprinkle of night steamed upward to the blue-glass sky. It was an early-morning sky; soon it would bake away and shrivel. An oppressive white haze would drift in from the Bay and hang lusterless over the world. But it was only eight thirty; the sky had two hours to live. Jim Fergesson happily rolled down the windows of his Pontiac and, poking his elbow out, leaned to inhale vast lungfuls of damp summer-morning air. His benign gaze, distorted by a residue of indigestion and nervous fatigue, took in the sight of sunlight dancing from gravel and pavements as he drove from Cedar Street into the half-deserted parking lot. He parked, turned off the motor, and sat for a moment lighting a cigar. A few cars slithered in and parked around him. Cars swished along the street. Sounds, the first stirrings of people. In the quiet chill their movements set up metallic echoes from the office buildings and concrete walls. Fergesson climbed from his car and slammed the door. He crunched briskly across the gravel and down the sidewalk, hands in his pockets, heels clicking loudly, a small, muscular man in a blue serge suit, middle-aged, face red with wrinkles and wisdom, puffy lips twisting the column of his cigar. On all sides of him merchants rolled down their awnings with elaborate arm motions. A Negro was sweeping trash with a push broom into the gutter. Fergesson stepped through the trash with dignity. The Negro made no comment . . . early-morning sweeping machine. By the entrance of the California Loan Company a group of secretaries clustered. Coffee cups, high heels, perfume and earrings and pink sweaters, coats tossed over sharp shoulders. Fergesson gratefully inhaled the sweet scent of young women. Laughter, muted whispers, giggles, intimate words from soft lips passed back and forth, excluding him and the street. The office opened and the women tripped inside with a swirl of nylons and coattails . . . he glanced appreciatively back. Briefly, he longed for one of them, any one of them. Good for the store . . . like the old days. A woman adds class, refinement. Bookkeeper? Better someone where the customers can see her. Keeps the men from sweÅ keeps them kidding and laughing. "Morning, Jim." From Stein's MensWear. "Morning," Fergesson answered, without stopping; he held his arm behind him, fingers casually trailing. In front of Modern TV Sales and Service he halted and fished out his key. Critically, he surveyed his small, old-fashioned possession. Like a little old suit, the store steamed dully in the morning sunlight. The archaic neon sign was off. Debris from the night lay scattered in the entranceway. The TV and radio sets in the windows were murky, uninteresting shapes. Records, signs, banners . . . he kicked a pasteboard milk carton out of the doorway and onto the sidewalk. The carton rolled away, caught by the morning wind. Fergesson plunged his key in the lock and pushed open the door. Here no life existed. He squinted and spat away the first stale breath that hung inside the shop. In the rear the ghostly blue of the night-light rose like marsh gas over a decaying bog. He bent down and clicked on the main power; the big neon sign spluttered on, and after a moment, the window lights warmed to a faint glow. He fixed the door wide open, caught up some of the sweet outdoor air, and, holding it in his lungs, moved about the dark damp store, turning on banks of sets, display signs, fans, machinery, equipment, intercoms. The dead things came reluctantly back to life. A radio blared, then a long row of TV sets. He advanced on the night-light and destroyed it with a single jerk of his hand. He ignitedDick, Philip K. is the author of 'Voices from the Street ', published 2007 under ISBN 9780765318213 and ISBN 0765318210.