Understanding Infrastructure A Guide for Architects and Planners 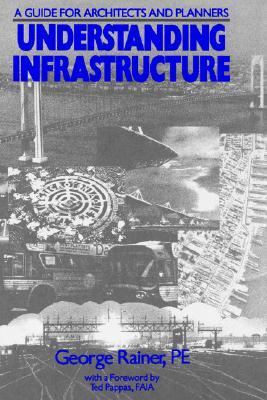 About the author George Rainer, PE, AICP, a principal in the firm of Flack+Kurtz, consulting engineers, has been involved in the infrastructure design of Roosevelt Island and Battery Park City, New York, including utilities supply, solid waste management, water supply and sewer systems. He also prepared energy master plans for the Grand Valley Urbanization Project, Colorado, and for college campuses in Tennessee, Massachusetts and New York. He has lectured at several colleges and developed the course on infrastructure at Pratt Institute. About the contributors Samuel I. Schwartz, PE, is Chief Engineer and First Deputy Commissioner of the New York City Department of Transportation. He has been overseeing the Department's $5 billion, 10-year program to reconstruct New York City's streets and bridges. Nicholas Bellizzi, PE, a traffic engineer and transportation planner, is a principal in The Hudson Partnership. His assignments have included a comprehensive traffic/transportation study of the George Washington Bridge and its approach areas. Sarelle Weisberg, AIA, is Program Manager for Public Works in the Department of General Services, New York City Bureau of Building Design and Construction. Anthony Nuciforo is a consultant in communications technology. He specializes in the design and implementation of large-scale telecommunications cabling systems. Ekkehart Schwarz, AIA, AICP, is President of Schwarz & Zambanini, architects, engineers, and urban designers. He has over 15 years' experience in the planning, design and redesign of streets infrastructure systems. Adrienne Bresnan, AIA, has served for 18 years in the capital projects division of the New York City Department of Parks and Recreation. Since 1988, she has been program manager for landmarks in New York's Department of General Services. Joseph Bresnan, AIA, served for 20 years in New York's Department of Parks and Recreation, where he created the preservation plans for Central Park and Prospect Park, Brooklyn. Ray Gordon, AIA, is a principal of the firm of Mark A. Kates Architects. Before that he was project manager of an environmental sciences firm where he specialized in large-scale waterfront development projects. Joseph DePlasco is a writer and historian working in the Chief Engineer's office, New York City Department of Transportation.Rainer, George is the author of 'Understanding Infrastructure A Guide for Architects and Planners', published 1990 under ISBN 9780471505464 and ISBN 0471505463.