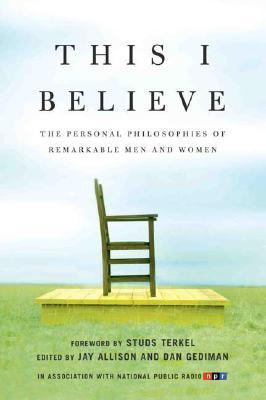 Foreword Studs Terkel "At a time when the tide runs toward a sure conformity, when dissent is often confused with subversion, when a man's belief may be subject to investigation as well as his actions . . ." It has the ring of a 2006 mayday call of distress, yet it was written in 1952. Ed Murrow, introducing an assemblage of voices in the volume This I Believe, sounded a claxon. It is an old story yet ever-contemporary. In 1791, Tom Paine, the most eloquent visionary of the American Revo-lution, sounded off: Freedom has been hunted around the globe; reason was considered as rebellion; and the slavery of fear made man afraid to think. But such is the irresistible nature of truth is that all it asks, and all it wants, is the liberty of appearing . . . In such a situation, man becomes what he ought to be. He sees his species not with the inhuman idea of a natural enemy, but as kindred . . . It is the pursuit of this truth that appears to be the common tenor of all the voices you hear in this new volume. We need not dwell on the old question: What is truth? What you see with your own eyes may differ from the received official truth. So old Pilate had only one decision to make: find the man guilty or he, the judge, will be sent back to the boondocks. Pilate did what any well-behaved hack would do. Though he had his hands scrubbed and rub-a-dub-dubbed with Ivory soap, 99.44% pure, he could not erase the awful truth of the dirt on his hands. Though Pilate's wife pleaded for a show of mercy, he made an objective decision. In our time, James Cameron, the nonpareil of British journalism, dealt with the matter in his own way. "I cannot remember how often I've been challenged for disregarding the fundamental tenet of honest journalism, which is objectivity." His bearing witness in North Vietnam during that war convinced him, despite all official Washington arguments to the contrary, that North Vietnam was inhabited by human beings. He was condemned for being non-objective and having a point of view. Cameron confesses, "I may not have always been satisfactorily balanced; I always tended to argue that objectivity was of less importance than the truth." Errol Morris, film documentarian, who appears in this book, shares the obstinancy of Cameron: "Truth is not relative. . . . It may be elusive or hidden. People may wish to disregard it. But there is such a thing as truth." What really possesses Morris is the pursuit of the truth: "Trying to figure out what has really happened, trying to figure out how things really are." The chase is what it's all about. The quarry is, as always, the truth. On a small patch of Sag Harbor dirt is a simple stone easily passed by. Nelson Algren is buried there and his epitaph is simple: "The journey is all." Andrew Sullivan, editor of The New Republic, who appears in this volume, has a similar vision. He and Algren may have differed considerably in their political views, yet here, as to fundamental belief, they were as one. "I believe in the pursuit of happiness. Not its attainment, nor its final definition, but its pursuit." I'd be remiss with no mention of Helen Keller, whose vision we saw and whose voice we heard fifty years ago, a deaf, dumb, and blind child. It was her sense of wonder and her pursuit of truth which she saw much more clearly than sighted people, and heard much more clearly than hearing folk. They were voices in need throughout the world she heard so vividly. Above all it was her faith that the human being was better than his/her behavior. What I believe is a compote of these ingredients. Yes I do have a point of view which I express much too frequently, I suspect.Allison, Jay is the author of 'This I Believe ', published 2007 under ISBN 9780805086584 and ISBN 0805086587.