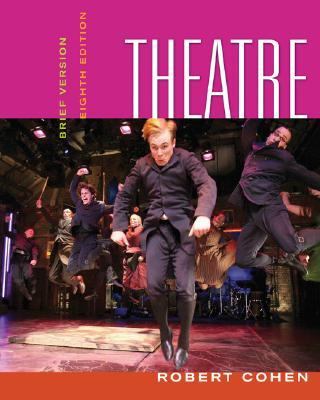 ROBERT COHEN was the founding chair Drama at the University of California at Irvine, where he continues to serve as the department's Claire Trevor Professor of Drama. He has also been a resident acting teacher at the Actors Center in New York, the Shanghai Theatre Academy, the Korean National Arts University, and the national theatre academies of Hungary, Finland, and Estonia. He is an accomplished stage director, scholar, playwright, drama critic, and teacher. A director by training (Doctor of Fine Arts, Yale Drama School), Cohen has staged thirteen professional productions at the Utah and Colorado Shakespeare Festivals, plus well over a hundred productions at Stages Theatre Center (Hollywood), Virginia Museum Theatre (Richmond), Theatre 40 (Beverly Hills), Image Theatre (Boston), Summer Repertory Theatre (Santa Rosa), the Medieval Drama Project (Irvine), the Manhattan Theatre Source, various universities, and several operas, videos and films. In addition to Theatre and Theatre: Brief Edition, he is also the author of many theatre books, including Acting One, Advanced Acting, Acting in Shakespeare, Acting Professionally, Acting Power, More Power to You, Giraudoux: Three Faces of Destiny, Creative Play Direction, and two dramatic anthologies. His essays have appeared in Theatre Journal, Theatre Topics, Theatre Forum, Theatre Survey, Modern Drama, Theater der Zeit, Essays in Theatre, On Stage Studies, The Drama Review, Contemporary Literature, Contemporary Literary Criticism, Slavic and East European Performance, Experiment and Innovation, and Dramatic Theory and Criticism. Cohen's play, The Prince, published by Dramatic Publishing Company, has been professionally produced in Long Beach, Pittsburgh, Budapest, and in staged readings in New York and Los Angeles; his dramatic translations (The Bourgeois Gentleman, The Misanthrope, Clizia, Tibi's Law) and opera translations (The Magic Flute, Carmen) have been both produced and published widely. For the past twenty years, Cohen has been the Southern California drama critic for Plays International, reviewing over two hundred plays. In 1999, he received the national Career Achievement award from ATHE - the Association for Theatre in Higher Education.Cohen, Robert is the author of 'Theatre', published 2007 under ISBN 9780073330907 and ISBN 0073330906.