The Spies of Warsaw 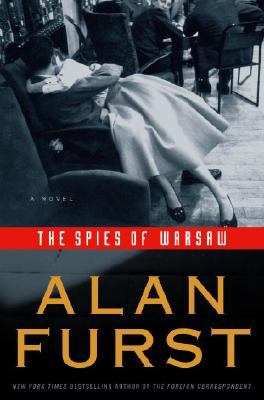 HOTEL EUROPEJSKI In the dying light of an autumn day in 1937, a certain Herr Edvard Uhl, a secret agent, descended from a first-class railway carriage in the city of Warsaw. Above the city, the sky was at war; the last of the sun struck blood-red embers off massed black cloud, while the clear horizon to the west was the color of blue ice. Herr Uhl suppressed a shiver; the sharp air of the evening, he told himself. But this was Poland, the border of the Russian steppe, and what had reached him was well beyond the chill of an October twilight. A taxi waited on Jerozolimskie street, in front of the station. The driver, an old man with a seamed face, sat patiently, knotted hands at rest on the steering wheel. "Hotel Europejski," Uhl told the driver. He wanted to add, and be quick about it, but the words would have been in German, and it was not so good to speak German in this city. Germany had absorbed the western part of Poland in 1795-Russia ruled the east, Austria-Hungary the southwest corner-for a hundred and twenty-three years, a period the Poles called "the Partition," a time of national conspiracy and defeated insurrection, leaving ample bad blood on all sides. With the rebirth of Poland in 1918, the new borders left a million Germans in Poland and two million Poles in Germany, which guaranteed that the bad blood would stay bad. So, for a German visiting Warsaw, a current of silent hostility, closed faces, small slights: we don't want you here. Nonetheless, Edvard Uhl had looked forward to this trip for weeks. In his late forties, he combed what remained of his hair in strands across his scalp and cultivated a heavy dark mustache, meant to deflect attention from a prominent bulbous nose, the bulb divided at the tip. A feature one saw in Poland, often enough. So, an ordinary- looking man, who led a rather ordinary life, a more-than-decent life, in the small city of Breslau: a wife and three children, a good job- as a senior engineer at an ironworks and foundry, a subcontractor to the giant Rheinmetall firm in Dusseldorf-a few friends, memberships in a church and a singing society. Oh, maybe the political situation- that wretched Hitler and his wretched Nazis strutting about-could have been better, but one abided, lived quietly, kept one's opinions to oneself; it wasn't so difficult. And the paycheck came every week. What more could a man want? Instinctively, his hand made sure of the leather satchel on the seat by his side. A tiny stab of regret touched his heart. Foolish, Edvard, truly it is. For the satchel, a gift from his first contact at the French embassy in Warsaw, had a false bottom, beneath which lay a sheaf of engineering diagrams. Well, he thought, one did what one had to do, so life went. No, one did what one had to do in order to do what one wanted to do-so life really went. He wasn't supposed to be in Warsaw; he was supposed, by his family and his employer, to be in Gleiwitz-just on the German side of the frontier dividing German Lower Silesia from Polish Upper Silesia-where his firm employed a large metal shop for the work that exceeded their capacity in Breslau. With the Reich rearming, they could not keep up with the orders that flowed from the Wehrmacht. The Gleiwitz works functioned well enough, but that wasn't what Uhl told his bosses. "A bunch of lazy idiots down there," he said, with a grim shake of the head, and found it necessary to take the train down to Gleiwitz once a month to straighten things out. And he did go to Gleiwitz-that pest from Breslau, back again!-but he didn't stay there. When he was done bothering the local management he took the train up to Warsaw where, in a manner of speaking, one very particular thing got straightened out. For Uhl, a blissful night of lovemaking, followed by a brief meeting at dawn, a secret meeting, then back to Breslau, back to Frau Uhl and his more-than-decent life. Refreshed. Reborn. ToFurst, Alan is the author of 'The Spies of Warsaw', published 2008 under ISBN 9781400066025 and ISBN 1400066026.