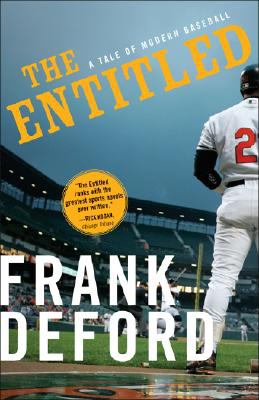 Excerpt from The Entitled That Night So, for Howie, it was, at last: neither resignation on the one hand, nor anger on the other. No, it was sim¬ply awful, horrible disappointment that tore at him. That it all must end this way. No, not this way. Any¬way it ended would be a calamity, because despair would follow, and Howie understood himself well enough to know that he didn't possess the creative resources to really ever overcome that despair. This is the way he put it, over the phone, to Lindsay: "I'm a dead man, sweetie. I know I won't get outta Baltimore alive." Howie was, after all, a practical man. Whenever one of his regulars would go onto the disabled list, all the writers would flutter around him, asking how the team could possibly manage until the wounded star returned. "I don't deal with the dead," Howie would reply. That concluded the discussion. Ask me about the ones who could suit up. You play with what you had. And now it was he who was the dead man, because he was positive that he was going to be fired in Baltimore, and that would mean the end of his life in baseball, which was the only existence he had ever known. There was a singular blessing. Because his demise was so clear-cut, he had, for the short term, found a certain calm within, so by the time he got to Baltimore he was concerned mostly with how, when the inevitable happened, he must display dignity upon his leave-taking. There would be no grousing. He would, in fact, thank the Indians for giving him the opportu¬nity to manage in the major leagues. He would wish the team and the organization well. There would be no backbiting. Of course, yes, he would, in passing (only in passing, you understand), recall how well the team had done under his aegis his first year on the job. He would not embellish that fact, but he would mention it (in passing) so as to remind everyone that just because Howie Traveler was a busher, he had shown that he could damn well man¬age a team in the big leagues. He had proved that. It was important to leave the media bastards with that. Especially the talk radio bastards, those who spewed venom for a living, and those amateur venom-spewing bastards who just called in. When he got to Baltimore and found the time, Howie was going to write down what he wanted to say, and then commit it to memory so that he would display extemporaneous eloquence in his last public appearance. In the meantime, he tried to pretend that he was not dwelling on what everyone knew. The pallbearers were assembling. Not only the columnists from the Plain Dealer and the Akron Beacon Journal, but, as well, the lead columnist of the Columbus Dispatch had signed onto the press manifest this trip, ready to dress up his obituary on the spot for the enlightenment of central Ohio fans. After all, a road trip offered the kind of time¬table general managers preferred for these proceedings. Fire the manager away from home. Let an interim manager-in this case, the team's trusty old reliable, Spencer "Frosty" Westerfield, the bench coach-handle the next series, in Chicago, and then have the new man on hand, prepared to assume command- "take the helm," as the papers would have it-when the team returned to Cleveland, ready to start fresh, turn a new leaf, salvage the season, restore the damage that he, Howie Traveler, had indisputably done. Never was anything so pat. So Howie just waited for Moncrief to fly in from Cleveland and fire him. Of course, everybody knows that baseball managers are, as it is written in stone, hired to be fired, but this was cold comfort when you were the manager in question and this was your time to be eighty-sixed. O'Reilly, one of the newspaper beat men who liked Howie and drank with him sometimes, told him that Diaz was already in Cleveland, working out his deal. Nobody could locate Diaz, but O'Reilly said they knew he was there. This figured. Even when the IndDeford, Frank is the author of 'The Entitled', published 2008 under ISBN 9781402212550 and ISBN 1402212550.