State of the Union A Century of American Labor 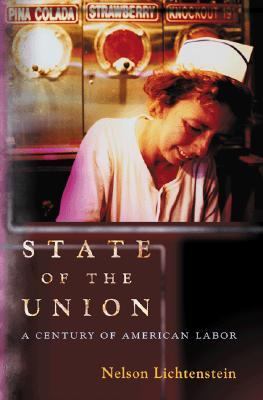 "Scholars have come to look to Nelson Lichtenstein for state-of-the-art work on American labor history. Now he has synthesized his immense learning into a powerful narrative of the ups and downs of unions since the New Deal. Elegiac, sympathetic, and keenly realistic,State of the Unionfocuses, above all, on the role of ideas and ideology in shaping contentious outcomes. The writing is engaged, analytically suggestive, and thoughtfully revisionist. Not just students of trade unions, but historians of the moments and episodes Lichtenstein chronicles, will be wrestling with this fascinating book for a long time to come."--Ira Katznelson, Ruggles Professor of Political Science and History, Columbia University "This is a brilliant work of historical synthesis and interpretation. No other historian has produced a narrative that cogently surveys intellectual developments, economic change, political and legal conflict, and the complexities of labor's internal struggles and weaves them into a compelling narrative that makes sense of the rise and fall of the working-class movement."--Michael Kazin, Professor of History, Georgetown University "Lichtenstein's textured account offers an impressive combination of astute historical analysis and keen social insight. Lichtenstein demonstrates how, despite its civil rights origins, the 'rights revolution' of the past generation has joined free-market ideology in undermining the legal and social basis for worker solidarity and union success. Greater individual freedoms have ironically not always helped the working people of America."--David Abraham, Professor of Law, University of Miami Law School "Nelson Lichtenstein, one of our leading historians, follows the movement for democracy and rights at work over the last hundred years, offering a masterful synthesis of the new labor history and the first comprehensive framework for a history of labor in our time."--Dorothy Sue Cobble, Professor of Labor Studies, Rutgers University "State of the Unionis a uniquely important study of the labor movement in twentieth-century American politics. Lichtenstein demonstrates both an intricate, grounded knowledge of union dynamics and a finely nuanced, sophisticated understanding of American political history since the New Deal. This book is a must read for anyone seriously interested in making sense of American politics during the last three-quarters of a century."--Adolph Reed, Professor of Political Science on the Graduate Faculty of Political and Social Science, New School University, and member of the Interim National Council of the Labor Party "You can find no better guide to the past and present of the American labor movement than Nelson Lichtenstein. Aimed at a general audience, this book shows how the health of American democracy depends on vital working-class organizations. It examines why unions have flourished in the past and asks how they may do so again."--William Forbath, Professor of Law and History, University of Texas, Austin, and author ofLaw and the Shaping of the American Labor Movement "Why has the labor movement's ability to speak collectively on behalf of American workers declined so dramatically? Ranging confidently across political, intellectual, social, and economic history, Nelson Lichtenstein gives us a sweeping and provocative analysis of the 'labor question' in the past fifty years--and how workers' basic democratic rights have been increasingly marginalized, contained, or eliminated. He eloquently reminds us that if we are to have democracy in America, we must celebrate, not repress, basic human rights at the workplace."--Dana Frank, Professor of American Studies, University of California, Santa CruzLichtenstein, Nelson is the author of 'State of the Union A Century of American Labor', published 2003 under ISBN 9780691116549 and ISBN 0691116547.