Standing in the Rainbow 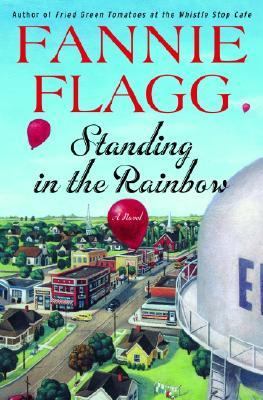 Elmwood Springs Almost everyone in town that had an extra room took in a boarder. There were no apartment buildings or hotels as of yet. The Howard Johnson was built a few years later but in the meantime bachelors needed to be looked after and single women certainly had to have a respectable place to live. Most people considered it their Christian duty to take them in whether they needed the few extra dollars a week or not, and some of the boarders stayed on for years. Mr. Pruiet, a bachelor from Kentucky with long thin feet, boarded with the Haygoods so long that they eventually forgot he was not family. Whenever they moved, he moved. When he finally did die at seventy-eight, he was buried in the Haygood family plot with a headstone that read: MR. PRUIET STILL WITH US PAID IN FULL The homes on First Avenue North were located within walking distance of town and school and were where most of the town's boarders lived. At present the Smith family's boarder is Jimmy Head, the short-order cook at the Trolley Car Diner; the Robinsons next door have Beatrice Woods, the Little Blind Songbird; the Whatleys up the street have Miss Tuttle, the high school English teacher. Ernest Koonitz, the school's band director and tuba soloist, boards with Miss Alma, who, as luck would have it, has a hearing problem. But soon the Smith family will take in a new boarder who will set in action a chain of events that should eventually wind up in the pages of history books. Of course they won't know it at the time, especially their ten-year-old son, Bobby. He is at the moment downtown standing outside the barbershop with his friend Monroe Newberry, staring at the revolving red and white stripes on the electric barber's pole. The game is to stare at it until they are cross-eyed, which seemed to them to be some sort of grand achievement. As far as amusements go, it is on a par with holding your breath until you pass out or dropping from a rope into the freezing swimming hole outside of town named the Blue Devil, so cold that even on a hot day when you hit the water the first shock jolts you to your eyeballs, stops your heart, and makes you see stars before your eyes. By the time you come out your body is so numb you can't feel where your legs are and your lips have turned blue, hence the name. But boys, being the insane creatures they are, cannot wait to come crawling out covered with goose bumps and do it all over again. These were some of the activities that thrilled Bobby to the core. However, for Bobby just life itself was exciting. And really at that time and that place what red-blooded American boy would not wake up every morning jumping for joy and ready to go? He was living smack-dab in the middle of the greatest country in the worldsome said the greatest country that ever was or ever would be. We had just beaten the Germans and the Japanese in a fair fight. We had saved Europe and everyone liked us that year, even the French. Our girls were the prettiest, our boys the handsomest, our soldiers the bravest, and our flag the most beautiful. That year it seemed like everyone in the world wanted to be an American. People from all over the world were having a fit trying to come here. And who could blame them? We had John Wayne, Betty Grable, Mickey Mouse, Roy Rogers, Superman, Dagwood and Blondie, the Andrews Sisters, and Captain Marvel. Buck Rogers and Red Ryder, BB guns, the Hardy Boys, G-men, Miss America, cotton candy. Plus Charlie McCarthy and Edgar Bergen, Amos 'n' Andy, Fibber McGee and Molly, and anybody could grow up and become the president of the United States. Bobby even felt sorry for anyone who was not lucky enough to have been born here. After all, we had invented everything in the world that really mattered. Hot dogs, hamburgers, roller coasters, roller skates, ice-cream cones, elecFlagg, Fannie is the author of 'Standing in the Rainbow' with ISBN 9780679426158 and ISBN 0679426159.