Soon I Will Be Invincible 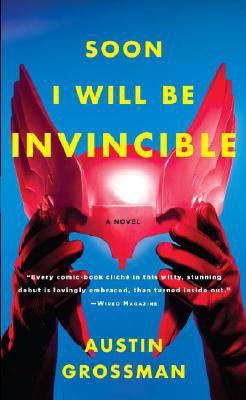 CHAPTER ONE FOILED AGAIN This morning on planet Earth, there are one thousand, six hundred, and eighty-six enhanced, gifted, or otherwise-superpowered persons. Of these, one hundred and twenty-six are civilians leading normal lives. Thirty-eight are kept in research facilities funded by the Department of Defense, or foreign equivalents. Two hundred and twenty-six are aquatic, confined to the oceans. Twenty-nine are strictly localizedpowerful trees and genii loci, the Great Sphinx, and the Pyramid of Giza. Twenty-five are microscopic (including the Infinitesimal Seven). Three are dogs; four are cats; one is a bird. Six are made of gas. One is a mobile electrical effect, more of a weather pattern than a person. Seventy-seven are alien visitors. Thirty-eight are missing. Forty-one are off-continuity, permanent emigres to Earth's alternate realities and branching timestreams. Six hundred and seventy-eight use their powers to fight crime, while four hundred and forty-one use their powers to commit them. Forty-four are currently confined in Special Containment Facilities for enhanced criminals. Of these last, it is interesting to note that an unusually high proportion have IQs of 300 or moreeighteen to be exact. Including me. I don't know why it makes you evil. It's just what you find at the extreme right edge of the bell curve, the one you'd get if six billion minds took an intelligence test and you looked at the dozen highest scores. Picture yourself on that graph, sliding rightward and downslope toward the very brightest, down that gradually gentler hill, out over the top million, the top ten thousandall far smarter than anyone most people ever meetout to the top thousandand now things are getting sparserthe last hundred, and it's not a slope at all now, just a dot every once in a while. Go out to the last few grains of sand, the smartest of the smartest of the smartest, times a thousand. It makes sense that people would be a little odd out here. But you really have to wonder why we all end up in jail. Wake-up for me is at 6:30 a.m., half an hour earlier than the rest of the inmates. There's no furniture in my cellI'm stretched out on the painted green rectangle where I'm allowed to sleep. The way my skin is, I hardly feel it anyway. The facility is rated for enhanced offenders, but I'm the only one currently in residence. I am their showpiece, the pride of the system, and a regular feature on the governor's tours for visiting dignitaries. They come and watch the performance, to see the tiger in his cage, and I don't disappoint. The guard raps on the plexiglas wall with his nightstick, so I get up slowly and move to the red painted circle, where they run a scan, X ray, radiation, and the rest. Then they let me put on clothes. I get eight minutes while they check the route. You can do a lot of thinking in eight minutes. I think about what I'll do when I get out of here. I think about the past. If I had writing materials, I might write a guidebook, a source of advice and inspiration for the next generation of masked criminals, bent prodigies, and lonely geniuses, the ones who've been taught to feel different, or the ones who knew it from the start. The ones who are smart enough to do something about it. There are things they should hear. Somebody has to tell them. I'm not a criminal. I didn't steal a car. I didn't sell heroin, or steal an old lady's purse. I built a quantum fusion reactor in 1978, and an orbital plasma gun in 1979, and a giant laser-eyed robot in 1984. I tried to conquer the world and almost succeeded, twelve times and counting. When they take me away, it goes to the World CourttechGrossman, Austin is the author of 'Soon I Will Be Invincible' with ISBN 9780307279866 and ISBN 0307279863.