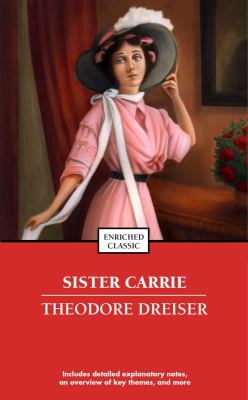 Sister Carrie: A Dramatic Story of Real Life Choices A young woman takes the train to Chicago in search of workv in 1889, thus setting in motion a chain of events that will lead her to fame and fortune in New York's glittering theater world. While the plot ofSister Carriemay sound like a fairy tale, Theodore Dreiser was actually trying to write a work of literary realism. He filled the pages of the novel, first published in 1900, with the harsh details of everyday life, and generated controversy for the veiled but potent depiction of Carrie's sexual experiences with the dapper traveling salesman and the "respectable" saloon manager, who both try to seduce her. The story of Dreiser's Carrie resembles that of the melodramatic "damsel in distress," especially when she realizes that sin may be her only option for survival. And yet there was one aspect of melodrama that Dreiser purposely left out ofSister Carrie: Carrie neither agonizes over her choices, norexpresses regret for her actions. In fact, at times it seems she is not even aware that she is acting badly. Dreiser emphasizes that Carrie acts as she does simply because she wants to be comfortable. Perhaps even more scandalously, Dreiser's novel implies that most people, if faced with the same choices Carrie faces, would do exactly the same. It was a shocking message. Americans had read tales of "fallen women" before, but they were hesitant to embrace fiction that showed people acting immorally without any kind of consequence. (Consider that, up until the mid-1960s, films made in the United State were governed by a production code requiring films to portray immoral behavior with a tone of disapproval, emphasizing its undesirability.) Fueled by his background as an urban reporter, Dreiser felt that literature that bound itself to upholding moral standards was dissatisfying. He wroteSister Carrieto defy such standards and to offer readers a glimpse of how Americans living and toiling in the rapidly expanding urban industrial centers really lived. Inspired by the true-life story of his own sister, Emma Dreiser, who had made Chicago headlines when she ran away with a married man, Dreiser wroteSister Carrieto make a statement about what literature was for. Though realism was becoming more popular as a style at the time, Dreiser's particular version of realistic fiction initially won few fans. Aware that he might have trouble finding a publisher, Dreiser cut his manuscript substantially, following the suggestions of a well-meaning friend and editor, Arthur Henry. Even so, the press that agreed to print the novel later tried to recant its offer. Though an agreement was reached, the publisher released only a limited number of copies, fearing scandal. In recent years, literary scholars have attempted to restore the text to its original condition, publishing "unexpurgated" editions. The edition included here, however, shows what readers found when they opened the novel in 1900, and what Dreiser himself continued to reissue during his lifetime. It is a text that both reflects and challenges the standards of a turn-of-the-century audience. The Life and Work of Theodore Dreiser Dreiser came to his career as a novelist slowly. The child of a German-Catholic immigrant father and a German-American mother, Dreiser was born in Terre Haute, Indiana, in 1871. He grew up in a large family that struggled with poverty and drifted apart, moving in and out of the booming city of Chicago. Dreiser's older sisters had affairs and out-of-wedlock children that would inspire the stories of "immoral" women in the author's later work. After dropping out of school, he slowly found his way to work as a reporter, taking jobs with newspapers in Chicago, St. Louis, Toledo, Pittsburgh, and finally New York, where he became interested in documenting the kind of urban poverty his own family had endured. DreiDreiser, Theodore is the author of 'Sister Carrie', published 2008 under ISBN 9781416561491 and ISBN 1416561498.