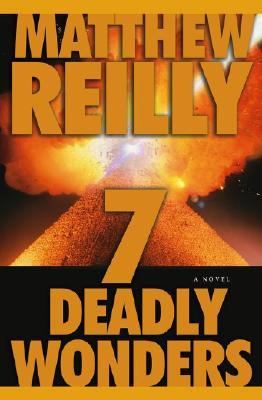 Chapter One: The Greatest Statue In History ANGEREB SWAMPBASE OF THE ETHIOPIAN HIGHLANDS KASSALA PROVINCE, EASTERN SUDANMARCH 14, 2006, 4:55 P.M.6 DAYS BEFORE THE ARRIVAL OF TARTARUS The nine figures raced through the crocodile-infested swamp on foot, moving fast, staying low. The odds were stacked against them. Their rivals numbered in excess of two hundred men. They had only nine. Their rivals had massive logistical and technical support: choppers, floodlights for night work, and boats of every kind -- gunboats, houseboats, communications boats, three giant dredging barges for the digging, and that wasn't even mentioning the temporary dam they'd managed to build. The Nine were only carrying what they'd need inside the mine. And now -- the Nine had just discovered -- a third force was on its way to the mountain, close behind them; a much larger and nastier force than that of their immediate foes, who were nasty enough. By any reckoning it was a hopelessly lost cause, with enemies in front of them and enemies behind them, but the Nine kept running anyway. Because they had to. They were a last-ditch effort. The last throw of the dice. They were the very last hope of the small group of nations they represented. Their immediate rivals -- a coalition of European nations -- had found the northern entrance to the mine two days ago and were now well advanced in its tunnel system. A radio transmission that had been intercepted an hour before revealed that this pan-European force -- French troops, German engineers, and an Italian project leader -- had just arrived at the Third Gate inside the mine. Once they breached that, they would be inside the Grand Cavern itself. They were progressing quickly. Which meant they were also well versed in the difficulties found inside the mine. Fatal difficulties. Traps. But the Europeans' progress hadn't been entirely without loss: three members of their point team had died gruesome deaths in a snare on the first day. But the leader of the European expedition -- a Vatican-based Jesuit priest named Francisco del Piero -- had not let their deaths slow him down. Single-minded, unstoppable, and completely devoid of sympathy, del Piero urged his people onward. Considering what was at stake, the deaths were an acceptable loss. The Nine kept charging through the swamp on the south side of the mountain, heads bent into the rain, feet pounding through the mud. They ran like soldiers -- low and fast, with balance and purpose; ducking under branches, hurdling bogs, always staying in single file. In their hands, they held guns: MP7s, M16s, Steyr AUGs. In their thigh holsters were pistols of every kind. On their backs: packs of various sizes, all bristling with ropes, climbing gear, and odd-looking steel struts. And above them, soaring gracefully over the treetops, was a small shape, a bird of some sort. Seven of the Nine were indeed soldiers. Crack troops. Special forces. All from different countries. The remaining two members were civilians, the elder of whom was a long-bearded sixty-five-year-old professor named Maximilian T. Epper, call sign: Wizard. The seven military members of the team had somewhat fiercer nicknames: Huntsman, Witch Doctor, Archer, Bloody Mary, Saladin, Matador, and Gunman. Oddly, however, on this mission they had all acquired new call signs: Woodsman, Fuzzy, Stretch, Princess Zoe, Pooh Bear, Noddy, and Big Ears. These revised call signs were the result of the ninth member of the team: A little girl of ten. The mountain they were approaching was the last in a long spur of peaks that ended near the SReilly, Matthew is the author of 'Seven Deadly Wonders - Matthew Reilly - Hardcover' with ISBN 9780743270533 and ISBN 0743270533.