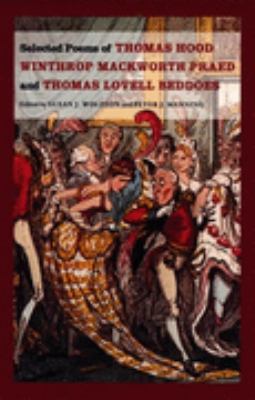 This anthology brings together three powerfully original figures who vividly capture the spirit and anxieties of their age. Thomas Hood and Winthrop Mackworth Praed write with a self-conscious playfulness about literary history and traditions as well as an active and often satirical engagement with contemporary social and political culture. Thomas Lovell Beddoes has always held the interest of the "dark" Victorianists for his lushly lurid imagination and of the modernists for his ironic, frequently caustic verses. Most of all, these are three amazingly interesting poets-full of verbal wit, evocative imagery, compelling imaginations. Although he started by writing in the style of Keats, Thomas Hood (17991845) declared, "I have to be a lively Hood for a livelihood," and devoted most of his career to comic verse. But his sheer verbal ingenuity and endlessly inventive punning do not conceal his phobias and fears, nor overshadow the emerging social protest that was to shape the impressive poems in his later years. Winthrop Mackworth Praed (18021839) observed the social scene of his day-the flirtations, political intrigues, elegant chit-chat, and parliamentary procedures-with sparkling, self-deprecating wit. Having read law, Praed was called to the Bar in 1829 and entered Parliament as a Conservative in 1830. Even so, he wrote to his school friend and future editor, "Having been favoured by Nature with a long face, a short purse, and two elder Brothers, I find no way of making myself popular in the circle in which she has placed me, except versifying." Thomas Lovell Beddoes (18031849), who committed suicide, was, in the editors' words "brilliant, solitary, eccentric, erratic, homosexual, politically radical, a poet of powerful, haunting imagination, and, like the other morbidly witty poets in this volume, is most characteristic for his defiance of easy characterization." He has been called the last Elizabethan, a Jacobean scion, an original interpreter of gothic terror, the first modernist, and, with his comic grotesqueries, a precursor of the twentieth-century theater of the absurd. The editors' introductions to each poet are lively and accessible to the non-specialist, while their editorial work, both in establishing the texts and in their annotation and apparatus, makes this an ideal text for specialist study as well.Wolfson, Susan J. is the author of 'Selected Poems of Thomas Hood, Winthrop Mackworth Praed and Thomas Lovell Beddoes' with ISBN 9780822957607 and ISBN 0822957604.