Return to the Whorl 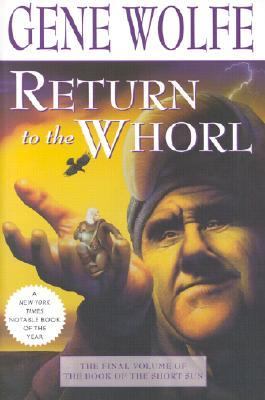 1 The Bloodstained Men We have been journeying by guess, and it is high time we admitted it. Thus I admit it here. All things considered, we have been fortunate; but unless we are favored by the Vanished Gods of Blue far above most, it cannot continue. In this third book, which will surely be the last, I will begin by saying that, and telling you who we are; but first I should mention that the bandits are all dead, and that I, rummaging through their loot, have discovered this paperan entire baleand am making haste to use it. * * * His thoughts seemed to have nothing to do with the dead woman, her coffin, or the hot sunshine streaming through the open door into the poor little room. There was a pattering, as of rain; moisture splashed his ankles, and he looked down and saw blood trickling from his fingers to splash into a small pool at his feet. His son had deserted him. He was wounded. (No doubt the blood was from that wound?) He lay in the medical compartment of a lander, though he was standing now, his blood dripping on worn floorboards. The bier was for another, it seemed, and the other was a middle-aged woman, and was already dead. A knife with a worn blade and a cracked wooden handle lay at his feet. Reflexively, he bent to pick it up, and recoiled from it as if from a coiled snake. Something screamed in the emptiness, something deeper than resentment and thoughts of water, food, and healing. He backed away from the knife and stumbled through the open door into the darkest night ever known. * * * We are four, a number that includes Oreb but excludes our four horses and Jahlee's white mule. Oreb is my bird and often a nuisance, as he is at this moment, trying to wrest one of his old quills from my fingers. "It's no use, Oreb," I say. "I want to write-have just started a new book-and I won't play with you at all unless you behave yourself." "Good bird!" He means himself. Have I mentioned Hide? Looking over this sheet, I see I have not. Hide is the fourth member of our party and my son, one of three. He is of medium height, not bad-looking, solid, muscular, and rising sixteen. He wears a sheepskin coat shorter than mine, a sheepskin hat, and sheepskin boots that are very well greased now, he having found a pot of mutton fat. No doubt the bandits used it for the same purpose. The bandits, I should say, are all dead. Even the last. I would like to inter them with some decency, but the ground is frozen. Jahlee suggested burning their bodies, but it would take a great deal of wood, I am sure, to consume the bodies of nine men. I must have been present when Patera Silk, Patera Quetzal, and Maytera Marble burned Maytera Rose. If someone had asked me about it yesterday, I would have said that I was not, that Nettle and I went away to fight for Maytera Mint after Echidna ordered her to destroy the Alambrera; yet I find that I can very clearly visualize the skull peering from the flames. It seems likely that I am confusing that occasion with some other on which a body was burned. In any event I am certain they used a great deal of good, dry cedar. Our wood here will be green, and that which is not green will be wet with snow. Hide and I, working hard, might cut that much wood in a week, perhaps. (I in half an hour if I used Hyacinth's azothbut what folly it would be to let them know I have it now!) Anything else about Hide? A lot, although I will not try to set it all down. Hide has a twin, his brother Hoof, who looks exactly like him. Hoof is in the south, or at least Hide believes he is. We were tempted turn to south around the marsh in the hope of finding him. It would have been farther, but I wish we had. I am telling you all this in case the first two books in my saddlebag are lost or destroyed,Wolfe, Gene is the author of 'Return to the Whorl' with ISBN 9780312873646 and ISBN 0312873646.