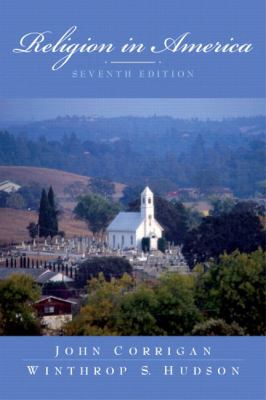 This is a story about religion in America. But it is not the only story about religion in America. At certain points in the telling, it corresponds with other stories about people, places, and religious things. Sometimes, on the other hand, this story takes turns that distance it from these other stories. Like all other stories of a nation's past, it is an intertwining of many threads of narrative. Here and there those threads are woven into a relatively sturdy, even fabric. In other places, the warp and woof are uneven, ragged, or fragile. History is complex, to some extent indeterminate, and is subject to constant revision. This history of the development of American religious life is, accordingly, a work in progress. A story changes with each telling, and this story is no different. In preparingReligion in Americafor a seventh edition, I have added several new sections, and have enlarged and detailed others. In this edition I note the important Reformation and Catholic Reformation backgrounds to Christian missionizing in North America, and especially the way in which the struggles between Protestants and Catholics in Europe translated in certain ways to the vigorous Jesuit and Franciscan and Sulpician ventures on this side of the Atlantic. The legacy of the Spanish presence in colonial North America--in the form of a distinctive Hispanic Catholicism--is also the subject of a more detailed discussion. This treatment is particularly appropriate in view of the recent dramatic growth of that part of the population whose background is Hispanic. The careful work undertaken by historians in recent years to enlarge our understanding of African American religious history has made possible a broader and deeper picture of that aspect of the story. Drawing on this ongoing research, I have added material on the emergence of the African American denominations, on the role of religion in African American social movements (from mutual aid societies to the Convention Movement), on the formation of black women's religious societies, and on the growing popularity of Islam and Islamic movements among African Americans. Historical scholarship continues to confirm the primary roles of women in sustaining religious institutions in America. In a new section on the "female majority," I describe some of the roles played by women, as well as the resistance that they encountered, as they sought to expand the scope of their religious activities in antebellum America. In discussing this period, I also address in greater detail the ways in which Catholics and Jews organized their religious life and the ways in which that life changed as those communities grew and diversified. There likewise is a fuller discussion of the most important of nineteenth-century national revivals, the Businessmen's Revival (or, Union Revival) of 1858, which served at one level to accentuate ethnic, gender, class, and age differences in religious groups at the same time that it fostered unity on another level. Pentecostalism has proven to be one of the most vital and fast-growing branches of Christianity, both in America and in many other parts of the world. The story in this edition takes more time with the beginnings of Pentecostalism in America, noting the ways in which Pentecostalism, over the course of the twentieth century, has moved from the periphery of American religious life into the mainstream of popular culture. By the same token, Islam has developed from its status as a religion practiced solely by first- and second-generation immigrants to a faith embraced by a broad base of Americans, and especially as a religion that appeals to African Americans. I address this development in greater detail, noting the differences in styles of Islam in America and the ways in which it has been connected or disconnected with Islam as it is practiced elsewhere. I likewise note how the events of September 11, 2001, have affected theCorrigan, John S. is the author of 'Religion in America An Historical Account of the Development of American Religious Life', published 2003 under ISBN 9780130923899 and ISBN 0130923893.