Rebels of Ireland The Dublin Saga 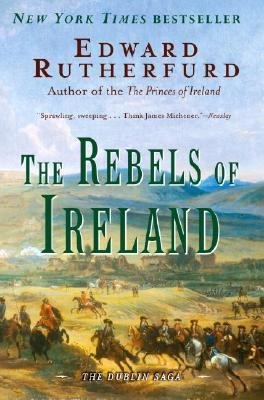 PLANTATION 1597 Octor Simeon Pincher knew all about Ireland. Doctor Simeon Pincher was a tall, thin, balding man, still in his twenties, with a sallow complexion and stern black eyes that belonged in a pulpit. He was a learned man, a graduate and fellow of Emmanuel College, at Cambridge University. When he had been offered a position at the new foundation of Trinity College in Dublin, however, he had come thither with such alacrity that his new hosts were quite surprised. "I shall come at once," he had written to them, "to do God's work." With which reply, no one could argue. Not only did he come with the stated zeal of a missionary. Even before his arrival in Ireland, Doctor Pincher had informed himself thoroughly about its inhabitants. He knew, for instance, that the mere Irish, as the original native Irish were now termed in England, were worse than animals, and that, as Catholics, they could not be trusted. But the special gift that Doctor Pincher brought to Ireland was his belief that the mere Irish were not only an inferior people, but that God had deliberately marked them outalong with others, too, of coursesince the beginning of time, to be cast into eternal hellFire. For Doctor Simeon Pincher was a follower of Calvin. To understand Doctor Pincher's version of the subtle teachings of the great Protestant reformer, it was only necessary to listen to one of his sermonsfor he was already accounted a Fine preacher, greatly praised for his clarity. "The logic of the Lord," he would declare, "like His love, is perfect. And since we are endowed with the faculty of reason, with which God in His inFinite goodness has bestowed upon us, we may see His purpose as it is." Leaning forward slightly towards his audience to ensure their concentration, Doctor Pincher would then explain. "Consider. It is undeniable that God, the fount of all knowl-edgeto whom all ages are but as the blinking of an eyemust in His inFinite wisdom know all things, past, present, and to come. And therefore it must be that even now, He knows full well who upon the Day of Judgement is to be saved, and who shall be cast down into the pit of Hell. He has established all things from the beginning. It cannot be otherwise. Even though, in His mercy, He has left us ignorant of our fate, some have already been chosen for Heaven and others for Hell. The divine logic is absolute, and all who believe must tremble before it. Those who are chosen, those who shall be saved, we call the Elect. All other, damned from the First, shall perish. And so," he would Fix his audience with a terrible stare, "well may you ask: 'Which am I?'" The grim logic of John Calvin's doctrine of predestination was hard to refute. That Calvin was a deeply religious and well-meaning man could not be doubted. His followers strove to follow the loving teachings of the gospels, and to live lives that were honest, hardworking, and charitable. But for some critics, his form of religion ran a risk: its practice could become unduly harsh. Moving from France to Switzerland, Calvin had set up his church in Geneva. The rules governing his community were sterner than those of the Lutheran Protestants, and he believed that the state should enforce them by law. Following their strict moral regimeand reporting their neighbours to the authorities for any failure to live according to God's lawhis congregation did not only seek to earn a place in Heaven, but also to prove to themselves and to the world that they were indeed the predestined Elect who had already been chosen to go therRutherfurd, Edward is the author of 'Rebels of Ireland The Dublin Saga', published 2007 under ISBN 9780345472366 and ISBN 0345472365.