Realism and the Balancing of Power A New Debate

by Vasquez, John A., Elman, Colin 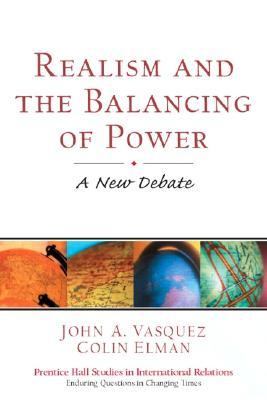 by Vasquez, John A., Elman, Colin

Realism and the Balance of Power: A New Debatepresents a conversation about the merits of the most recent phase of realist research on international relations. For at least sixty years, realists and nonrealists alike have been occupied with defining, defending, and defeating different versions of realist theory. On the one hand, successive groups of realist scholars have presented their own preferred interpretation, always on the bones of preceding accounts. Classical realists, for example, were critiqued by structural realists, who were in turn opposed by neotraditionalists. On the other hand, while nonrealist scholars offered radically different views of how the international system works and of what drives state behavior, they, too, juxtaposed their accounts with the then prevailing version of the realist canon. In short, although differing on what they wanted to replace it with, both realist's and their critics have largely taken realist theory as their target of choice. The bull's-eye in that mark has often been the subset of realist theory that might loosely be described as "balance of power theory"-the various arguments that realists have offered about why and how great powers respond to their threatening external environment, especially the accumulation of a threatening concentration of power by another state--and associated observations about the implications of those responses for the international system. The editors position themselves on different sides of this conversation. John Vasquez is a longstanding and trenchant critic of realism. Colin Elman, by contrast, has been characterized as a "defender of the faith." While acknowledging these differences, however, the editors concur on the importance of IR theorists engaging in a sustained dialogue on the different standards by which research, including realism, can be judged. Scholars need to explicate what frameworks they will use to evaluate and appraise a theory. In philosophy of science such frameworks are referred to as metatheories (i.e., theories about the nature of theory). Thus, scholars should add a prefix to their appraisals of realism: "According tometatheory x,how well is realism doing? IR scholars describe and judge their theories in terms of the larger theoretical groupings with which they identify or disagree. Members of the subfield often categorize groups of scholars with loyalties to particular theoretical aggregates and seek to make judgments about the trajectory of those aggregates. They rarely make explicit statements of the metatheory on which they are relying, or the grounds on which they calculate the comparative merits of competing theories. This book is structured around the argument that scholarly judgments about theories should be based on consciously chosen metrics, and that those selections should be made with due consideration of the different standards' strengths and limitations. The book takes as its starting point an essay by John Vasquez (1997) contending that, when judged using a particular metatheory's criteria, recent realist research is problematic. Vasquez applies Imre Lakatos's Methodology of Scientific Research Programs (MSRP) to a succession of recent variants of realist theory and finds them wanting. In a series of articles responding to that claim, seven realists questioned Vasquez's choice and use of MSRP, as well as his conclusions. Several additional essays (commissioned for this book) follow, further expanding the discussion. Thus, the book is intended to be read and used in at least four different ways: First, the book is the most recent iteration in the long running dialogue between realists and their critics. While pursuing a usefully different approach from previous accounts, the book builds upon this distinguished academic tradition. Second, while taking realism as their substantive focus, more generally the essays investigate how political scientistVasquez, John A. is the author of 'Realism and the Balancing of Power A New Debate', published 2002 under ISBN 9780130908667 and ISBN 0130908665.