Popular Writing in America The Interaction of Style and Audience

by McQuade, Donald A., Atwan, Robert 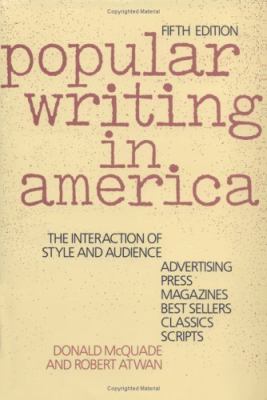 by McQuade, Donald A., Atwan, Robert

Used for nearly two decades in schools nation-wide, this unique anthology offers provocative examples of successful, influential American writing drawn from advertising, the press, popular magazines, bestsellers, classics, film and television, suiting a variety of classroom purposes--topics for lively class discussions, practical models for student composition, and imaginative texts for literary study. The fifth edition places a new emphasis on multicultural perspectives on the media, and offers an infusion of new selections by a diversity of authors, both within and outside the established literary canon. New to this edition are essays by John Updike, Frederick Douglass, Harriet Jacobs, E.B. White, Maxine Hong Kingston, Walker Percy, Lewis Thomas, Annie Dillard and June Jordan, as well as short stories by Nathaniel Hawthorne, Charlotte Perkins Gilman, Raymond Carver, and Amy Tan, giving teachers a wider range of both fiction and nonfiction to work with. In response to requests for more material encouraging issue-oriented expository writing, the Fifth Edition expands the Press and Magazine sections to include a generous sampling of contemporary essays and articles on such topics as abortion, AIDS, censorship, "politically correct" speech codes, racism, feminism, the canon controversy, and multiculturalism. The popular Advertising section, a proven tool for teaching rhetorical and argumentative strategies, now includes many new advertisements and essays providing in-depth discussion of familiar ads and related campaigns. Of special interest is a large cluster of short selections on the obscenity controversy surrounding the rap group "2 Live Crew" designed to stimulate classroom discussion and encourage students to develop argumentative essays more effectively. As always, every selection is connected either stylistically or thematically with one or more of the other selections, and an expanded "Table of Linked Selections" follows the "Rhetorical Table of Contents". This feature encourages readers to discover the different ways the same subject can be treated by different writers or by different media--for example, how staff writers for Time and Newsweek each handled the space shuttle disaster in January 1986, how a major author like Stephen Crane used his personal experience of a disaster at sea to write both a newspaper report and a classic American short story, or how Ernest Hemingway's famous short story, "Soldier's Home," was transformed into a film script. Current and comprehensive, Popular Writing in America offers a unique method of teaching composition, one that appeals to students and teachers alike.McQuade, Donald A. is the author of 'Popular Writing in America The Interaction of Style and Audience', published 1993 under ISBN 9780195073089 and ISBN 0195073088.