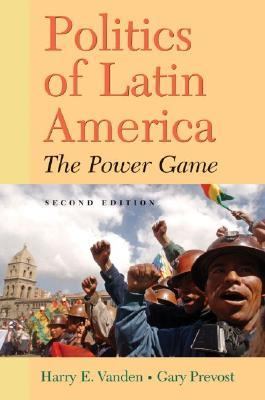 Politics of Latin America, Second Edition, explores both the evolution and the current state of the political scene in Latin America. Distinguishing itself from more traditional works on Latin American politics, this text demonstrates a nuanced sensitivity to the use and abuse of power and the importance of social conditions, gender, race, globalization, and political economy. The first section of the book presents relevant information about the region's geographic setting, history, economics, society, people, and religion, setting the stage for a more detailed analysis of the politics, democratization, political culture, political movements, and revolution in Latin America. The second part of the book consists of carefully constructed case studies of nine representative Latin American nations: Guatemala (Susanne Jonas), Mexico (Nora Hamilton), Cuba (Prevost), Brazil (Wilber Albert Chaffee), Argentina (Aldo C. Vacs), Chile (Eduardo Silva), Venezuela (Daniel Hellinger), Colombia (John C. Dugas), and Nicaragua (Prevost and Vanden). Each case study traces the historical development of key political actors and institutions, analyzing contemporary power configurations. Keeping pace with the rapidly changing events in each country, this expanded second edition provides fresh material throughout, including more information on interamerican relations and the successes and failures of democracy in Latin America. Along with two entirely new chapters on Venezuela and Colombia, it also features sections that thoroughly discuss democratic versus authoritarian political culture, the role of the United States, and the power game in Latin America. The thematic chapters offer updated background analyses--including a discussion of the 2002-2005 electoral triumphs of several presidents who were critical of the neo-liberal agenda, the new movements that have deposed presidents--and additional sections on U.S.-Latin American relations. Incorporating maps, tables, chronologies, bibliographies and clear indications of key players, Politics of Latin America, Second Edition, is indispensable for students and other readers wishing to gain a deeper understanding of this complex, dynamic, and rapidly changing region of the world.Vanden, Harry E. is the author of 'Politics of Latin America The Power Game', published 2005 under ISBN 9780195188080 and ISBN 019518808X.