Papers of Wilbur and Orville Wright, Including the Chanute-Wright Letters 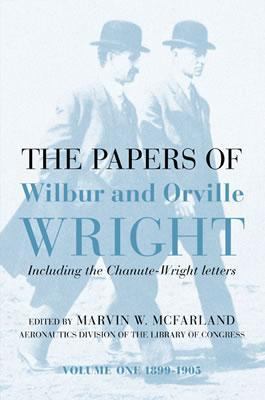 THE PAPERS OF WILBUR & ORVILLE WRIGHT "On December 17, 1903, on a cold, windswept patch of sand in North Carolina's Outer Banks, five years of experimental work backed by solid engineering and flashes of utter genius reached a climax. At 10:35 A.M. that day, two brothers with the improbable names of Wilbur and Orville forever changed the way that people would live and dream. Because on that day the human race, in the guise of two quiet, unassuming men from the great American Midwest, slipped the shackles that had bound men to the Earth since time began. In a flight that covered 120 feet and lasted 12 seconds, man had made a controlled, sustained flight. More simply put, man had conquered the air." ---From the Foreword to these new 100th Anniversary volumes by Stanley W. Kandebo, Assistant Managing Editor, Aviation Week & Space Technology Amazingly, the brothers never collaborated to create a full first person narrative of their experiments, of their historic flight, or of the trials they faced in its aftermath. They also failed to leave engineering drawings that fully captured all the details of their aircraft. As Aviation Week editor Kandebo writes, "that ... is exactly why the private papers of Wilbur and Orville Wright--their notebooks, their diaries, and their extremely important correspondence with [aeronautic pioneer] Octave Chanute--are so fundamentally important to the saga of how man conquered the air." This carefully bound and boxed set faithfully recreates the historic original first edition of The Papers of Wilbur and Orville Wright. Published in 1953, five years after Orville Wright's death, those volumes are now rare. Reissued to make the Papers once again available and to mark the Centennial of Flight, this set of documents--diary entries, drawings, and personal and aeronautical correspondence--edited by a director of the Aeronautics Division of the Library of Congress, represent the most complete published record left by the Wright brothers on their triumph, and its far-ranging consequences to themselves and to the world. In 1903 at Kitty Hawk, North Carolina, two brothers, Wilbur and Orville Wright, made the first manned, controlled, sustained, successful powered flight in a heavier-than-air craft--a flight that both electrified the imagination of the world and revolutionized aeronautical theory. Now, fifty years after this history-making event, the private papers of the Wright brothers are published for the first time. Under the sponsorship of Oberlin College, Marvin W. McFarland representing the Library of Congress Aeronautics Division has edited and annotated the great mass of material. Volume One covers the years from 1899 to 1905, the years of the Wrights' experimentation; Volume Two spans the years from 1906 to 1948, the years of public recognition and acclaim. Both volumes include, besides a number of scientific papers highlighting the Wrights' vast contribution to the science of aeronautics, their numerous diaries and letters, which show the brothers as persons of wit, warm affections, and integrity. In these two volumes is the fascinating correspondence (1900-1919) between Wilbur Wright and Octave Chanute, the early leader in the aeronautics field who freely lent his genius and aid to the brothers; excerpts from 33 Wright diaries and notebooks (1900-1919), and from Wright family correspondence; wind-tunnel tables, propeller notebooks, and many other selected articles, lectures, and writings by the brothers. Also included are five appendices that summarize technical information, 128 pages of halftones, 12 pages of historical photographs, a complete index, and numerous charts and diagrams. Selections from THE PAPERS Of WILBUR & ORVILLE WRIGHT Orville Wright I cannot think of any part bird flight had in the development of human flight excepting as an inspiration. Although we intently watcheMcFarland, Marvin W. is the author of 'Papers of Wilbur and Orville Wright, Including the Chanute-Wright Letters' with ISBN 9780071363761 and ISBN 0071363769.