Ordinary Love and Good Will 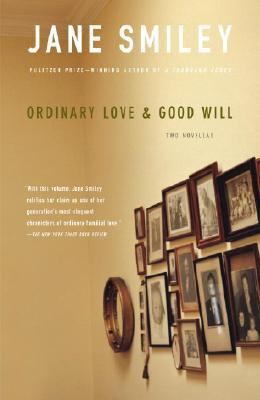 I don't want Joe to find me on my knees, buffing the kitchen floor with an old cotton turtleneck, but he does, and says, "Mom! What are you doing? Relax!" I sit back on my heels and say, "It's only six-thirty. What's with you?" But I know. We both know. He crosses the kitchen and pours himself his first cup of coffee. He drinks them three at a time, I've noticed this summer, hot and with lots of milk and sugar. Now he turns away from the coffeemaker, and the cup is half empty before he sits at the table. He is grinning. Michael will be here today. Michael, Joe's identical twin, has been teaching mathematics in a secondary school in Benares, India for two years. That is why I am buffing the floor, why neither of us can relax. The floor is pegged maple, about seventy-five years old. The boards vary in width from two inches to five, and are laid diagonally. In the last fifteen minutes, I have worked my way from the pantry to the back door, into a long bronze leaf of sunlight that colors my forearms and turns my hands muscular with shadows. I like this floor, troublesome as it is: caring for it, I remind myself of my mother, and this city, in spite of all its trees, seems rather like Nebraska, where I grew up. The long, rhythmic motions with the rag are soothing and productive at the same time. Joe says, "I think I'll leave for the airport about nine." He is bouncing in his chair. I smile and say, "Why don't you leave now?" "I'm relaxed, Mom. What makes you think I'm not relaxed?" His expression is almost maniacal. They are twenty-five, and they have not seen each other in two years. "You, woman, get up and have a cup of tea or something." And so I do, simply for the pleasure of sitting at the kitchen table with my son. I let him make me toast and peel me an orange, and pour milk on my Rice Krispies. We talk about the geraniums in the window box and the broken lawnmower and the courses Joe is going to take when school starts again in two weeks. We don't talk about Michael. It is a family ritual, not to allude to the returning traveler while he or she is in transit. Usually we just don't speak the name, but this time Joe hasn't even said "he" or "my brother." Joe has been with me all summer, the longest time we've spent together in six years, and I've gotten used to him. Joe was nervous about living with his mother all summer, but it has been one of the great summers of my life, the brush and thump and rattle of a congenial presence in the house every day. I'll be sorry when he goes back to school, and he knows it. He gets up from the table and goes into the dining room. He puts on some record, though only after carefully cleaning it off, and here comes Hank Williams, a compromise. I get back to the floor. He brought home his record collection and all summer his gift to me has been surprise music, but he can be pretty demanding--he's made me listen to Elvis Costello, The Talking Heads, The Flamin' Groovies, Dire Straits. I pretend I can hear the melodies. He says, only half joking, "This is pretty central to your mom-project, I would say, if you want to do it right." Doing it right involves learning to tolerate weirder harmonies than I was accustomed to before, but as a part of his "son-project" he plays the opera and the folk music I like. He was living in Chicago, but his girlfriend broke up with him in June. After he got here, she wrote him four letters in two days, then that was it. Louise, her name is. She'd visited here four or five times, and I'd liked her, found her a pleasant, straightforward young woman. At lunch after he had been here a few days, he pushed one of the letters across the table for me to read. The important thing, she wrote, was that she didn't have the power to make him happy. Joe got up then and went to pull weeds in the flower beds. I remembered that feelingSmiley, Jane is the author of 'Ordinary Love and Good Will ', published 2007 under ISBN 9780307279095 and ISBN 030727909X.