On Liberty and Utilitarianism 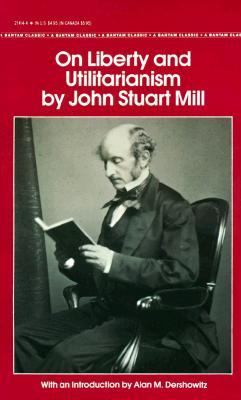 Chapter One Introduction THE SUBJECT of this Essay is not the so-called Liberty of the Will, so unfortunately opposed to the misnamed doctrine of Philosophical Necessity; but Civil, or Social Liberty: the nature and limits of the power which can be legitimately exercised by society over the individual. A question seldom stated, and hardly ever discussed, in general terms, but which profoundly influences the practical controversies of the age by its latent presence, and is likely soon to make itself recognized as the vital question of the future. It is so far from being new, that, in a certain sense, it has divided mankind, almost from the remotest ages; but in the stage of progress into which the more civilized portions of the species have now entered, it presents itself under new conditions, and requires a different and more fundamental treatment. The struggle between Liberty and Authority is the most conspicuous feature in the portions of history with which we are earliest familiar, particularly in that of Greece, Rome, and England. But in old times this contest was between subjects, or some classes of subjects, and the Government. By liberty, was meant protection against the tyranny of the political rulers. The rulers were conceived (except in some of the popular governments of Greece) as in a necessarily antagonistic position to the people whom they ruled. They consisted of a governing One, or a governing tribe or caste, who derived their authority from inheritance or conquest, who, at all events, did not hold it at the pleasure of the governed, and whose supremacy men did not venture, perhaps did not desire, to contest, whatever precautions might be taken against its oppressive exercise. Their power was regarded as necessary, but also as highly dangerous; as a weapon which they would attempt to use against their subjects, no less than against external enemies. To prevent the weaker members of the community from being preyed upon by innumerable vultures, it was needful that there should be an animal of prey stronger than the rest, commissioned to keep them down. But as the king of the vultures would be no less bent upon preying on the flock than any of the minor harpies, it was indispensable to be in a perpetual attitude of defence against his beak and claws. The aim, therefore, of patriots was to set limits to the power which the ruler should be suffered to exercise over the community; and this limitation was what they meant by liberty. It was attempted in two ways. First, by obtaining a recognition of certain immunities, called political liberties or rights, which it was to be regarded as a breach of duty in the ruler to infringe, and which, if he did infringe, specific resistance, or general rebellion, was held to be justifiable. A second, and generally a later expedient, was the establishment of constitutional checks, by which the consent of the community, or of a body of some sort, supposed to represent its interests, was made a necessary condition to some of the more important acts of the governing power. To the first of these modes of limitation, the ruling power, in most European countries, was compelled, more or less, to submit. It was not so with the second; and, to attain this, or when already in some degree possessed, to attain it more completely, became everywhere the principal object of the lovers of liberty. And so long as mankind were content to combat one enemy by another, and to be ruled by a master, on condition of being guaranteed more or less efficaciously against his tyranny, they did not carry their aspirations beyond this point. A time, however, came, in the progress of human affairs, when men ceased to think it a necessity of nature that their governors should be an independent power, opposed in interest to themselves. It appeared to them much better that the various magistrates of the State should be their tenants or delegates, revocable at their pleasure. In thaMill, John Stuart is the author of 'On Liberty and Utilitarianism', published 1993 under ISBN 9780553214147 and ISBN 0553214144.