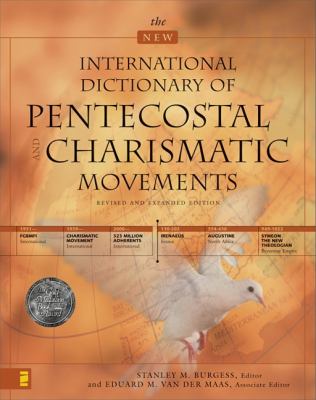 The Definitive History of the Spirit-Filled ChurchEncyclopedic coverage of:Activities of the Spirit over 2,000 years of church history in 60 countries and regionsOutpourings at Topeka, Mukti Mission (India), Azusa Street, Duquesne University, and many other 20th-century locationsCurrent movements among today's 500 million-plus Pentecostal and charismatic Christians worldwideThe New International Dictionary of Pentecostal and Charismatic Movements sets modern, Spirit-filled Christianity in a context that spans two millennia and the entire Christian world. Like no other resource, this volume reveals in detail the full, sweeping legacy of Spirit-empowered movements that have touched hearts and lives both in modern America and across the centuries and continents: in medieval Europe, Finland in the 1700s, South India in the 1800s, Azusa Street at the turn of the 20th century--and much more, including ongoing moves of the Holy Spirit throughout the world today.One thousand entries provide the most extensive information available on Pentecostal, charismatic, and neocharismatic movements. The diverse topics covered include, as a small sample, glossolalia, black and Hispanic Pentecostalism, prophecy, the role of women, faith healing, music, sociology, missions, church growth, and different historic and contemporary revivals.With its unique international and historical perspective, this completely revised and expanded second edition of the acclaimed Dictionary of Pentecostal and Charismatic Movements offers features that no other reference of its kind approaches. Its extraordinary scope and detailed, up-to-date coverage make this the definitive resource on Pentecostal and charismatic denominations and movements both in North America and worldwide.Includes:Exhaustive coverage of Pentecostal and charismatic movements in 60 countries and regions--individual histories, cultural and theological aspects, and key figures and institutions.Statistical section with a wealth of current information on the growth of classical Pentecostalism as well as charismatic and neocharismatic movements.1,000 articles.Over 500 photos and illustrations, maps, and timeline.Cross references, bibliographies, and indexes to people, places, and topics.Burgess, Stanley M. is the author of 'New International Dictionary of Pentecostal and Charismatic Movements Revised and Expanded Edition', published 2002 under ISBN 9780310224815 and ISBN 0310224810.