Murders in the Rue Morgue The Dupin Tales 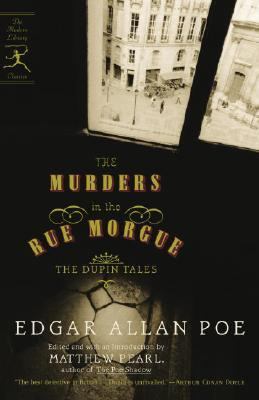 The Murders in the Rue Morgue What song the Syrens sang, or what name Achilles assumed when he hid himself among women, although puzzling questions, are not beyond all conjecture. Sir Thomas Browne The mental features discoursed of as the analytical, are, in themselves, but little susceptible of analysis. We appreciate them only in their effects. We know of them, among other things, that they are always to their possessor, when inordinately possessed, a source of the liveliest enjoyment. As the strong man exults in his physical ability, delighting in such exercises as call his muscles into action, so glories the analyst in that moral activity which disentangles. He derives pleasure from even the most trivial occupations bringing his talent into play. He is fond of enigmas, of conundrums, of hieroglyphics; exhibiting in his solutions of each a degree of acumen which appears to the ordinary apprehension praternatural. His results, brought about by the very soul and essence of method, have, in truth, the whole air of intuition. The faculty of re-solution is possibly much invigorated by mathematical study, and especially by that highest branch of it which, unjustly, and merely on account of its retrograde operations, has been called, as if par excellence, analysis. Yet to calculate is not in itself to analyse. A chess-player, for example, does the one without effort at the other. It follows that the game of chess, in its effects upon mental character, is greatly misunderstood. I am not now writing a treatise, but simply prefacing a somewhat peculiar narrative by observations very much at random; I will, therefore, take occasion to assert that the higher powers of the reflective intellect are more decidedly and more usefully tasked by the unostentatious game of draughts than by all the elaborate frivolity of chess. In this latter, where the pieces have different and bizarre motions, with various and variable values, what is only complex is mistaken (a not unusual error) for what is profound. The attention is here called powerfully into play. If it flag for an instant, an oversight is committed, resulting in injury or defeat. The possible moves being not only manifold but involute, the chances of such oversights are multiplied; and in nine cases out of ten it is the more concentrative rather than the more acute player who conquers. In draughts, on the contrary, where the moves are unique and have but little variation, the probabilities of inadvertence are diminished, and the mere attention being left comparatively unemployed, what advantages are obtained by either party are obtained by superior acumen. To be less abstractLet us suppose a game of draughts where the pieces are reduced to four kings, and where, of course, no oversight is to be expected. It is obvious that here the victory can be decided (the players being at all equal) only by some recherche movement, the result of some strong exertion of the intellect. Deprived of ordinary resources, the analyst throws himself into the spirit of his opponent, identifies himself therewith, and not unfrequently sees thus, at a glance, the sole methods (sometimes indeed absurdly simple ones) by which he may seduce into error or hurry into miscalculation. Whist has long been noted for its influence upon what is termed the calculating power; and men of the highest order of intellect have been known to take an apparently unaccountable delight in it, while eschewing chess as frivolous. Beyond doubt there is nothing of a similar nature so greatly tasking the faculty of analysis. The best chess-player in Christendom may be little more than the best player of chess; but proficiency in whist implies capacity for success in all those more important undertakings where mind struggles with mind. When I say proficiency, I mean that perfection in the game which includes a comprehensiPoe, Edgar Allan is the author of 'Murders in the Rue Morgue The Dupin Tales', published 2006 under ISBN 9780679643425 and ISBN 0679643427.