Monotheists Jews, Christians, and Muslims in Conflict and Competition 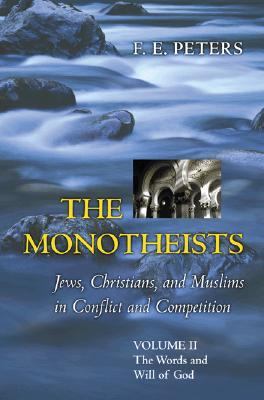 "Goethe said: 'As students of nature we are pantheists, as poets polytheists, as moral beings monotheists.' F. E. Peters'sThe Monotheistsgives a keener edge to Goethe's irony, and he teaches us again the 'conflict and competition' between Jews, Christians, and Muslims. Throughout his career, Peters has been our most comprehensive scholar of the agon waged by the three camps with one another. InThe Monotheistshe achieves the apotheosis of his enterprise, defining precisely this 'fractious family' in all its contours. The perpetual relevance of Peters's lifelong subject is heightened at our moment in history."--Harold Bloom, author ofThe Western Canon: The Books and School of the Ages "A work of breathtaking scope! Many scholars write about Judaism and Christianity, or Judaism and Islam, or Islam and Christianity, but only F. E. Peters has the learning, adventurousness, and historical imagination to take on all three religions in relation to one another within the scope of one book. Written in a clear expository prose, these volumes will be an invaluable resource for students and teachers, diplomats and statesmen, journalists and pundits on the vexing religious topics that today seem an inevitable part of political life and social discourse."--Robert Louis Wilken, author ofThe Spirit of Early Christian Thought "F. E. Peters has written a magisterial account of the family similarities and quarrels through the centuries of the three biblical religions, Judaism, Christianity, and Islam. In these two volumes, he is at once, as always, vastly learned and at the top of his form as an entertaining and persuasive writer. This work will immediately take its place as the standard account of the Hebrew Bible and its reflection in the Talmud, the New Testament, and the Koran."--Arthur Hertzberg, author ofJews: The Essence and Character of a People "An authoritative introduction to the study of Judaism, Christianity, and Islam,The Monothesistswill be especially useful for students in religious studies courses. To the initiates it offers an impressive original synthesis of the material and a challenging reading of important chapters in religious history. Written in clear, fluent prose, the book is never verbose, and its underlying structure is easy to follow."--Sarah Stroumsa, The Hebrew University of Jerusalem, author ofFreethinkers of Medieval Islam "The Monotheistsis a splendid work. It will be valuable as a classroom text on the three 'Western' monotheistic religious traditions, and it will also appeal to more general readers who seek to investigate the historical background to the present events in the Middle East. Previous such comparative studies are flawed by comparison."--Richard C. Martin, Emory University, author ofDefenders of Reason in IslamPeters, F. E. is the author of 'Monotheists Jews, Christians, and Muslims in Conflict and Competition' with ISBN 9780691114613 and ISBN 0691114617.