Love They Lost Living With the Legacy of Our Parents' Divorce 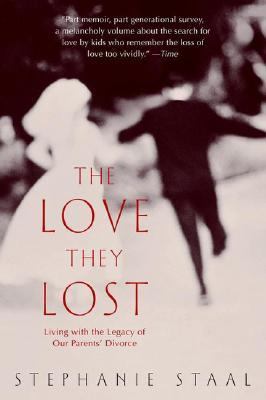 The Reluctant Heart Home is where one starts from. As we grow older The world becomes stranger, the pattern more complicated Of dead and living. Not the intense moment Isolated, with no before and after But a lifetime burning in every moment T. S. Eliot, The Four Quartets A couple of years ago, my mother went to the twenty-five-year reunion of her graduate school class, held on the very same university campus where she and my father first met. She tells me how, as she roamed through the reception, weaving among all those almost-recognizable faces peering nervously at name tags and clutching sweaty cocktails, she bumped into three old friends. The four of them had lost touch over the years, and with so much catching up to do, they got off to an awkward start. The conversation moved slowly, touching upon all the usual bases of idle chitchat, until suddenly they found the hook that broke through the proverbial ice. "We almost had to laugh," my mom mused wonderingly, "because we were all divorced." "Mom." I sighed, a little petulantly. "Who isn't divorced?" The brief extent of this exchange illuminates the gap in perception between my mother and me when it comes to divorce: Both my parents grew up during the fifties, when divorce was relatively unusual; they married during the early seventies as the divorce rate started to hit its peak, and divorced during the eighties. For them, divorce was a difficult choice; for me, divorce is a fact of life. Our parents are the architects of the culture of divorce we live in today. To some extent, every generation wrestles with the legacy inherited from the one before, and with our parents' generation, millions of couples more than ever before entered into marriages that disintegrated to the point that divorce seemed like the best way out. I know splitting up was often a painful process for them sometimes devastating but while our parents endured their divorces armed with the resources of age and experience, we were confronted with new and complicated emotions before we were fully capable of understanding them. For those of us who bore witness to the wave of divorce that engulfed our parents, their breakups defined our childhood, leaving imprints that may last a lifetime. I can name the date when my mother and sister moved out, and my family as a whole ceased to exist; the boundaries of the emotional reverberations of my parents' divorce, however, are more difficult to identify. After the age of thirteen, I never again lived under the same roof with my mother and sister. Unlike the overwhelming majority of children whose parents separate, I remained with my father, living in the house we once shared as a family. Yet nothing was the same. The rooms rang with loss, reducing my home to four walls from which to escape, not seek refuge. The holidays and weekends turned into days dissected into hours claimed by each parent. Protected by a carefully constructed armor of indifference, I sailed through these changes, my emotions tightly self-contained. I never once allowed myself to miss having two parents as one unit, residing in one home. Why would I? I knew my parents had been unhappy together, so it was for the best, really, that they were apart. I never engaged in any of the Parent Trap fantasies that my parents would reunite; on the contrary, the mere thought of having them in the same room, tense and silent, sent me into a panic. After I left home, I spent the next eight years trying to get as far away as possible from the memories of childhood. At seventeen, I packed up a large duffel bag with most of my belongings and moved across the country to attend college, without ever looking back. In the years that followed, I zigzagged frStaal, Stephanie is the author of 'Love They Lost Living With the Legacy of Our Parents' Divorce', published 2001 under ISBN 9780385334105 and ISBN 0385334109.

3 from $0.51
Loading marketplace prices 3 copies from $0.51 How does the rental process work?
View more