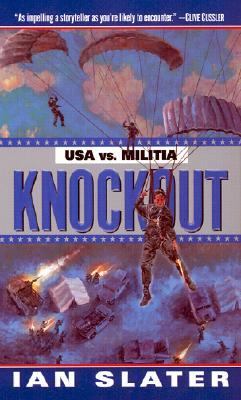 THE MAN'S VOICE was calm, measured. "Is this the White House?" "Yes, sir. How may I direct your call?" "You'll do." "Sir. How may I direct your call?" The man shook his head. He was in a phone booth on the I-5 above Seattle, watching the line of traffic branching off toward Anacortes, the terminal for the ferry run to the San Juan Islands off Washington State. "Sir, how may I direct your call?" "To the President." "Sir, I can't" "Now listen to me. You tell the son of a bitch that he's to release everyone at Camp Fairchild within twenty-four hours or the USMC is going to blow something up." "Sir, could you repeat" Of course, NSANo Such Agencywould now be taping him. He'd have to cut it short. Even so, he wasn't at all flustered. "The USMC," he told the receptionist, "is the United States Militia Corps, and that's twenty-four hours from now." He hung up and drove over to the mall at Burlington for a coffee and a sugar-soaked Cinabon roll. He prided himself on keeping in shapeeveryone in his unit didbut he believed in rewards too, and he had been planning this for a long time, ever since the government inquiry came out with what he considered whitewash hogwash about Waco, saying the Federals had done nothing wrong. Uh-huh, they only used tanks against women and kids before they incinerated them. Twenty-four hours after the phone call, no one at Fairchild, where the Feds held all the militia who'd run afoul of the law, had been released. They probably thought he was a nut case. CHAPTER ONE Everett, Washington State EVERYONE IN THE crowd of visitors, most of them American, was excited, impatient to start the tour of the Boeing plant. And why shouldn't they be? Since 1916, Boeing had made the biggest and the best, everything from the Model 40 which had carried the U.S. mail and two passengers"load permitting"to the ubiquitous B-52 bomber; the Saturn booster that had launched Armstrong to the moon; the ever popular Air Force One; the International Space Station in '98; and, for the millennium, the magical tilt-rotor Osprey, which performed either as a standard prop plane or helicopter. And sitting on the test runway, not far from the tour center, was one of the new generation of 737s, the world's largest digital state-of-the-art completely computer-designed twin jet airliner. A band struck up the national anthem of Thailand amid a cluster of suits, sunglasses, and ribbons as Boeing's latest effort was ceremoniously handed over to its new owners. Mel Haley and Pete Rainor had bought tickets for the eleven a.m. tour. It was now ten-fifty and like most of the other tourists, they were biding their time looking at the exhibits in the tour center. Rainor stared at the big grainy black-and-white blowup of the massive Flying Boats Boeing had built just before the Second World War, when airfields were scarce, which quickly changed with the onset of war, dooming the flying palaces. "Every passenger," Rainor said, "had his own bed. Can you believe it?" "Whatoh, yeah," Mel said, wondering whether he had enough time to run across the parking lot to the washroom. Rainor had told him there were none on the tour. He heard a woman behind the ticket counter trying to explain to a group of Japanese that no one under four-foot-two or cameras were allowed on the tour. Rainor told Mel he'd better decide about the washroom becSlater, Ian is the author of 'Knockout USA Vs. Militia', published 2001 under ISBN 9780449005590 and ISBN 0449005593.