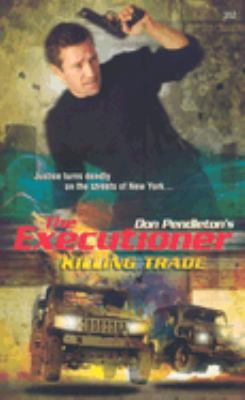 Mack Bolan surged to his feet from the folding chair, knocking it backward as he overturned the circular alloy table. Someone nearby screamed. As the Executioner crouched behind the dubious cover of the dented table, a steady stream of 62-grain steel-core ammunition punched merciless holes through it. Bolan swept aside his windbreaker and drew the Beretta 92-F from the holster inside his waistband. Rolling away from the table, he brought the weapon up in two hands as he crouched on one knee. He shot the gunman between the eyes, the 9 mm hollowpoint round coring through the man's head. The gunman staggered and dropped, his heavily accessorized AR-15 clattering to the pavement. Bolan pushed to his feet, knees bent, scanning left to right with the Beretta before him, searching for more targets. Around him, panicked citizens and tourists ran for their lives, overturning the outdoor furniture as they went.Bolan took stock. This was New York City, not Baghdad, but the scene had gone to hell faster than most. He was likely outnumbered and, because he'd tried to keep a low profile, out-gunned. The Beretta in his hands was a fine weapon, but offered nowhere near the firepower of the select-fire Beretta 93-R or.44 Magnum Desert Eagle that were his normal field kit.The instructions from Stony Man Farm had been clear enough, the scenario straightforward. Several high-profile shootings in New York City had raised flags at the Farm because of their technical details. Someone was using new small-arms ordnance on the streets, explosive high-penetration rounds that could chop through vehicles and body armor with startling ease. Aaron Kurtzman and the Farm's team of computer jockeys had traced the ammunition to a dealer trying to broker a large sale in Manhattan. The Executioner, posing as a buyer, was to meet this man. The time and place were set in advance.It was crucial not to spook the dealer. The arms network in the city could extend to any number of people. To find and destroy the source of the dangerous rounds, Bolan had to track it through this contact. He had loaded down accordingly, going armed but not heavily so, balancing preparation with the image he was trying to project to the arms dealer.Now, that lack of firepower might prove fatal. Hal Brognola, director of the Justice Department's Sensitive Operations Group, had stressed to him the delicate nature of the situation, the political sensitivities in a city only too recently the target of the world's worst terrorist attacks. It was a calculated risk, but it had seemed reasonable enough. Bolan was to meet the dealer, find out what he knew and trace him back to his sources.The contact failed to show. Whether he was dead, missing or had simply been scared off didn't matter. In the man's place had come an assassin.Bolan spared the fallen gunman a glance. The dead man's weapon had all the bells and whistles--tactical light, vertical foregrip, red-dot scope. Going only on the hardware and the man's clothing, it was possible the would-be murderer was a mercenary, of the type that Brognola and the Farm had warned Bolan to expect at some point.The arms dealer, a man named West, was formerly employed by a large munitions developer called Norris Labs International. NLI, among other activities, kept a security contractor on retainer--the type of private paramilitary force a company, if just corrupt enough, might field to cover its bloody tracks with more bodies. If the intel and the Farm's theories were correct, NLI was eager to prevent its involvement with the explosive ammunition from becoming known. They were therefore highly motivated to stop West and kill anyone connected with him.Their death list now seemed to include Bolan.The second shooter was not far behind the first. He engaged as he moved, firing a Heckler & Koch .45 as he ran, too eager to acquire his target. The man was clearly pushing the envelope of his own skills. Bolan held his gPendleton, Don is the author of 'Killing Trade (Executioner Series #352)', published 2008 under ISBN 9780373643523 and ISBN 0373643527.