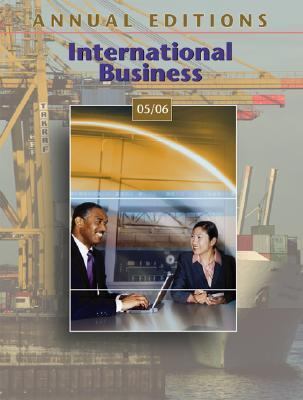 The item you're looking for is currently unavailable.

UNIT 1. The Nature of International Business Part A. Introduction to International Business 1. Who's Big? The Top 100, Fred H. Maidment, International Journal on World Peace, March 2002 What were the 100 largest measured economic entities at the end of the 20th century in terms of trade associations, countries, governments, and corporations? The answers here may surprise you. 2. American Corporations: The New Sovereigns, Lawrence E. Mitchell, The Chronicle of Higher Education, January 18, 2002 Corporations are growing in power and there doesn't seem to be any real accountability for them. This would seem to be true on both the international and domestic levels. 3. The Global Compact: Origins, Operations, Progress, Challenges, Georg Kell, The Journal of Corporate Citizenship, Autumn 2003 The UN is involved in sponsoring a global compact to promote globalization and economic progress. This compact involves all the factors on the international stage including companies, governments, and academia. 4. The Global Compact's Nine Principles, The Journal of Corporate Citizenship, Autumn 2003 Here are the nine principles of the global compact. This is an effort sponsored by the United Nations to encourage economic growth, justice, and globalization. 5. Business and Global Governance, Ann Florini, Brookings Review, Spring 2003 Multinational corporations are under pressure to reform their activities from a variety of competing organizations on a variety of fronts. 6. Looking Ahead To Our Place In The Next Economy, Matthew Budman, Across the Board, January/February 2004 What is the next big thing going to be in the next economy as it comes out of the recession? How will organizations respond to new conditions to be successful? What will their role be in the global economy? Part B. Economic Theories of International Trade, Development, and Investment 7. Integrating Multinational Firms Into International Economics, James R. Markusen, NBER Reporter, Winter 2001/2002 The evolution of multinational firms has not been very well integrated into international economy theory. James Markusen has developed a theory to help explain the actions of multinationals in the global economy. 8. The Rich Borrow and the Poor Repay, Ross P. Buckley, World Policy Journal, Winter 2002/2003 The three major international debt problems of the past thirty years are examined here: What caused them, who benefited from them, and who eventually paid for them. UNIT 2. The International Environment: Organizations and Monetary Systems Part A. International Organizations 9. The IMF Strikes Back, Kenneth Rogoff, Foreign Policy, January/February 2003 There has been a great deal of criticism of the International Monetary Fund (IMF) and its role in a variety of debt crises over the past several decades. Some of it has been unfair and overblown. What would have happened had there been no IMF? 10. Free Trade on Trial, The Economist, January 3, 2004 NAFTA, the North American Free Trade Agreement, is a success. But there are people who feel that it is not, particularly because it was originally oversold by those who supported it. Part B. The International Monetary System and Balance of Payments 11. Trading Down, Eamonn Fingleton, The American Prospect, March 2004 The trade deficit of the American economy is a ticking time bomb that is set to go off at some point in the future. When it does, Americans are certain to feel the pain. 12. The Sacking of Argentina, Tim Frasca, The Nation, May 6, 2002 Agentina's economy imploded in December 2001. Who is to bMaidment, Fred H. is the author of 'International Business 05/06 ', published 0015 under ISBN 9780073102085 and ISBN 0073102083.