I'll Be Watching You 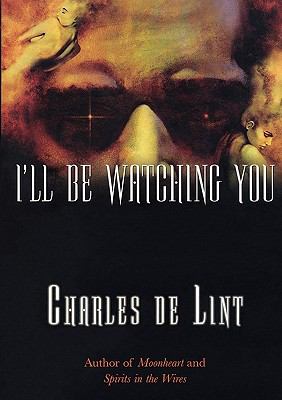 ONE A thunderstorm was raging in Rachel Sorensen's sleep. She was in an old barn, somewhere up north, far enough away from the city that the swaying trees outside the run-down structure could be called a forest. Rain came in between the old gray boards of the wall she was crouched against, splattering her face. Or were they tears that wet her cheeks? Because she knew she was hiding againnot until the bruises went away, but so that he wouldn't add to them. Her shoulder still ached from where he'd wrenched her arm from its socket, two nights past. A sudden thought came to her, and she looked frantically around the barn with the next flash of lightning. What if he was in the barn with her? What if this time, when he rammed the pistol up under her chin, he pulled the The thunder woke her. She sat upright in her own bed, in her own apartment. The ache in her shoulder was just a memory. Her cheeks were dampcrying in her sleep again. But it had just been a dream, nothing more. One more false memory to add to the collection of real hurts and aches and bad memories that she was still trying to put behind her. She looked out the window, hoping the view it gave of the park would calm her, then realized that it wasn't raining. The sky was clear. Stars could be made out against the city's light pollution, which rose for miles into the sky above the streets. The thunder came again. She turned her head once more, this time to the doorway of the bedroom. It's the door, she realized. Her gaze went to the clock beside the bed. The digital readout told her it was past three in the morning. She shivered. Please let this just be a dream, too, she thought. Because she knew who it was at her door. Her therapist had explained it to her: no matter where she went or how well she hid her tracks, if he was determined enough, he would find her. "You have to be prepared for that," Dr. Caley had told her, sympathetically. But sympathy was no help right now. She started to reach for the phone, but knew it was futile. By the time the police came, he'd be gone again, leaving her to deal with their endless questions. By the time they came, she could be dead. He was herenow. Pounding on the wood with his thick knuckles. Hands once gentle, turned hard and angry. "We just haven't got the manpower to put a squad car outside your building every night," the detective had explained to her, apologetically. Apologies were no help either. There was a lull. He'd stopped his assault on the door. But now she could hear his voice, muffled by the door, but all too familiar. "I'm your goddamn husband!" he shouted. She buried her face against the pillow. "No, you're not," she whispered. He was nothing to her now. He should be the past, lost, forgotten, but he wouldn't let her give it up.Hewouldn't give it up. There had been times when her body was a road map of bruises, the time he threw her down the stairs and broke her collarbone. It could have been her neck. Times, aYl tYiose times, too many times, and then he was so sorry after, so sorry, he'd go back on his medication, he promised he would, he didn't know what had gotten into him, because he loved her, he really did, and she, God help her, had believed him. Time after time, she had believed him. She left him twice before the divorce, and both times he tracked her down and brought her back. And showed her how much he loved her with his anger and his shouting and his fists and finally the gun shoved up under her chin. Such a calm, kind man, it was hard to believe, their mutual friends told her when she left the third and final time, ran to a shelter for battede Lint, Charles is the author of 'I'll Be Watching You' with ISBN 9780765304353 and ISBN 076530435X.