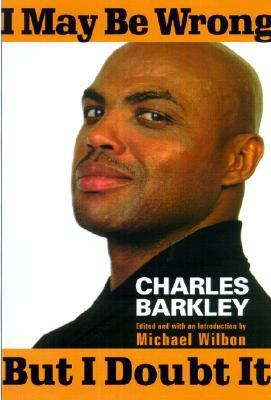 What's Really on My Mind I May Be Wrong but I Doubt Itisn't a basketball book. It's not really even a sports book, although basketball and sports are the vehicles I'm using to generate a much broader discussion, and are the things I am most intimately familiar with. There's been increased criticism of athletes, sometimes by people in the news media and sometimes by activists, that we run away from dealing with serious social issues, like poverty, racism, politics and education. Not only am I not running away from these discussions, at this point of my life-approaching forty years old and two years into retirement after a sixteen-year career in the NBA-I usually prefer them. I'm tired of talking about stuff that doesn't matter. I'm tired of "Charles, tell me which coaches you hated during your career," or "Charles, let's talk about which players in the league you don't like," or "Let's talk about groupies." Most reporters, I can't even convince them to talk about any serious topics, which I'm happy to have the chance to do now. If the topic is groupies, guys will blow my phone up. That's easy. If I want to say something bad about anybody, reporters will hang on every word. That's easy. So don't turn the page thinking you're going to read about that, because that's not what this is. I've done enough of that for the last twenty years. What I've come to realize is that I can have some control over this process. I can talk about whatever the hell I want to talk about. At this point in my life I'm trying to transition from sports into something broader, with wider social implications. I don't know if you can do it when you're playing. Guys get criticized for not being more socially conscious, for not spending more time talking about social issues, and that criticism may sound legitimate. But if you actually take on some social issues, particularly if you take some unpopular positions, you're going to get hammered. People say all the time they want you to talk about social issues. But if you do, and if you take a position that doesn't go down easy, you're "militant." My favorite one is, "When is the last time Charles Barkley struggled? What does Barkley know about growing up poor?" Well, I do know. Damn, I was poor. I grew up in the projects in Leeds, Alabama. If I was still poor, I wouldn't have the platform to speak up about the stuff we ought to be confront-ing. Some years ago, in a Nike commercial most people consider controversial, I suggested that athletes should not be primary role models. I told people to listen to their parents, not to athletes or celebrities, and I got killed for it. Is that bad advice, to say, "Listen to your parents, or your teachers, and not some damn celebrities"? But that's okay. I'm not overly concerned about people disagreeing with me. I'm concerned with the response in that I want to get people talking, get the discussion started. I'm going to say what's on my mind. Dan Patrick of ESPN, who I like very much, introduced me once as "Charles Barkley, who makes you think, makes you mad, but sometimes doesn't think before he talks." And I said, "Hey, wait a minute. I know exactly what I'm saying. I may say something some people consider controversial or outrageous, but I've thought about it before I said it." I always know what I'm saying, and I'm always prepared for the reaction. I may ask a dozen people about something, especially when it's a sensitive topic or something that's likely to be explosive. And I like getting input from smart people and people who've experienced things I'll never experience or haven't yet experienced. But ultimately I'm going to make up my mind and say what I really feel. Saying something just for the hell of it isn't worth anything because unless you provoke some conversation, what you're saying is irrelevanBarkley, Charles is the author of 'I May Be Wrong but I Doubt It Some Things I'Ve Learned So Far' with ISBN 9780375508837 and ISBN 037550883X.