I Am the Cheese 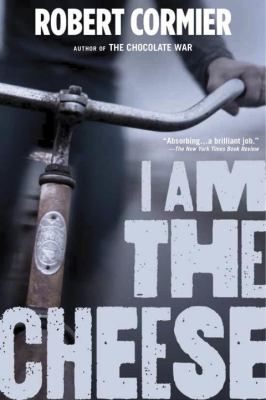 I am riding the bicycle and I am on Route 31 in Monument, Massachusetts, on my way to Rutterburg, Vermont, and I'm pedaling furiously because this is an old-fashioned bike, no speeds, no fenders, only the warped tires and the brakes that don't always work and the handlebars with cracked rubber grips to steer with. A plain bike - the kind my father rode as a kid years ago. It's cold as I pedal along, the wind like a snake slithering up my sleeves and into my jacket and my pants legs, too. But I keep pedaling, I keep pedaling. This is Mechanic Street in Monument, and to my right, high above on a hill, there's a hospital and I glance up at the place and I think of my father in Rutterburg, Vermont, and my pedaling accelerates. It's ten o'clock in the morning and it is October, not a Thomas Wolfe October of burning leaves and ghost winds but a rotten October, dreary, cold, damp with little sun and no warmth at all. Nobody reads Thomas Wolfe anymore, I guess, except my father and me. I did a book report onThe Web and the Rockand Mr. Parker in English II regarded me with suspicion and gave me aB-instead of the usualA. But Mr. Parker and the school and all of that are behind me now and I pedal. Your legs do all the work on an old bike like this, but my legs feel good, strong, with staying power. I pass by a house with a white picket fence and I spot a little kid who's standing on the sidewalk and he watches me go by and I wave to him because he looks lonesome and he waves back. I look over my shoulder but there's no one following. At home, I didn't wave goodbye to anybody. I just left. Without fanfare. I didn't go to school. I didn't call anyone. I thought of Amy but I didn't call her. I woke up this morning and saw an edge of frost framing the window and I thought of my father and I thought of the cabinet downstairs in the den and I lay there, barely breathing, and then I got up and knew where I was going. But I stalled, I delayed. I didn't leave for two hours because I am a coward, really. I am afraid of a thousand things, a million. Like, is it possible to be claustrophobic and yet fear open spaces, too? I mean, elevators panic me. I stand in the upright coffin and my body oozes sweat and my heart pounds and this terrible feeling of suffocation threatens me and I wonder if the doors will ever open. But the next day, I was playing center field - I hate baseball but the school insists on one participating sport - anyway, I stood there with all that immensity of space around me in center field and I felt as though I'd be swept off the face of the planet, into space. I had to fight a desire to fling myself on the ground cling to the earth. And then there are dogs. I sat there in the house, thinking of all the dogs that would attack me on the way to Rutterburg, Vermont, and I told myself, This is crazy, I'm not going. But at the same time, I knew I would go. I knew I would go the way you know a stone will drop to the ground if you release it from your hand. I went to the cabinet in the den and took out the gift for my father. I wrapped it in aluminum foil and then wrapped it again with newspaper, Scotch-taping it all securely. Then I went down to the cellar and got the pants and shoes and jacket, but it took me at least a half hour to find the cap. It would be cold on the road to Vermont and this cap is perfect, woolen, the kind that I could pull over my ears if the cold became a problem. Then I raided my savings. I have plenty of money. I have thirty-five dollars and ninety-three cents. I have enough money to travel first class to Vermont, in the Greyhound bus that goes all the way to Montreal, but I know that I am going by bike to Rutterburg, Vermont. I don't want to be confined to a bus. I want the open road before me, I want to sail on the wind. The bike was waiting in the garage and that's how I wanted to go. By bike, by my own strength and power. For my fatCormier, Robert is the author of 'I Am the Cheese ', published 2007 under ISBN 9780375840395 and ISBN 0375840397.