House Behind the Cedars 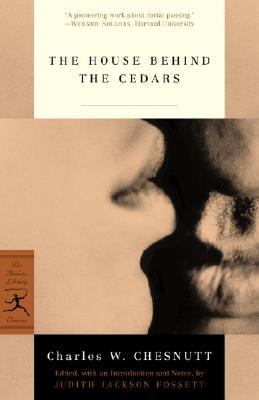 I A Stranger from South Carolina Time touches all things with destroying hand; and if he seem now and then to bestow the bloom of youth, the sap of spring, it is but a brief mockery, to be surely and swiftly followed by the wrinkles of old age, the dry leaves and bare branches of winter. And yet there are places where Time seems to linger lovingly long after youth has departed, and to which he seems loath to bring the evil day. Who has not known some even-tempered old man or woman who seemed to have drunk of the fountain of youth? Who has not seen somewhere an old town that, having long since ceased to grow, yet held its own without perceptible decline? Some such trite reflectionas apposite to the subject as most random reflections arepassed through the mind of a young man who came out of the front door of the Patesville Hotel about nine o'clock one fine morning in spring, a few years after the Civil War, and started down Front Street toward the market-house.1 Arriving at the town late the previous evening, he had been driven up from the steamboat in a carriage, from which he had been able to distinguish only the shadowy outlines of the houses along the street; so that this morning walk was his first opportunity to see the town by daylight. He was dressed in a suit of linen duckthe day was warma panama straw hat, and patent leather shoes. In appearance he was tall, dark, with straight, black, lustrous hair, and very clean-cut, high-bred features. When he paused by the clerk's desk on his way out, to light his cigar, the day clerk, who had just come on duty, glanced at the register and read the last entry: " 'John Warwick, Clarence, South Carolina. "One of the South Ca'lina bigbugs, I reckonprobably in cotton, or turpentine."2 The gentleman from South Carolina, walking down the street, glanced about him with an eager look, in which curiosity and affection were mingled with a touch of bitterness. He saw little that was not familiar, or that he had not seen in his dreams a hundred times during the past ten years. There had been some changes, it is true, some melancholy changes, but scarcely anything by way of addition or improvement to counterbalance them. Here and there blackened and dismantled walls marked the place where handsome buildings once had stood, for Sherman's march3 to the sea had left its mark upon the town. The stores were mostly of brick, two stories high, joining one another after the manner of cities. Some of the names on the signs were familiar; others, including a number of Jewish names,4 were quite unknown to him. A two minutes' walk brought Warwickthe name he had registered under, and as we shall call himto the market-house, the central feature of Patesville, from both the commercial and the picturesque points of view. Standing foursquare in the heart of the town, at the intersection of the two main streets, a "jog" at each street corner left around the market-house a little public square, which at this hour was well occupied by carts and wagons from the country and empty drays awaiting hire. Warwick was unable to perceive much change in the market-house. Perhaps the surface of the red brick, long unpainted, had scaled off a little more here and there. There might have been a slight accretion of the moss and lichen on the shingled roof. But the tall tower, with its four-faced clock, rose as majestically and uncompromisingly as though the land had never been subjugated. Was it so irreconcilable, Warwick wondered, as still to peal out the curfew bell, which at nine o'clock at night had clamorously warned all negroes, slave or free, that it was unlawful for them to be abroad after that hour, under penalty of imprisonment or whipping?5 Was the old constable, whose chiefChesnutt, Charles Waddell is the author of 'House Behind the Cedars', published 2003 under ISBN 9780812966169 and ISBN 0812966163.