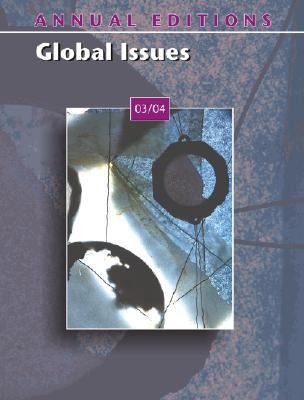 UNIT 1. Global Issues in the Twenty-First Century: An Overview 1. A Special Moment in History, Bill McKibben, The Atlantic Monthly , May 1998 The interconnected dangers of overpopulation, climate change, and pollution have been in the headlines for years, but doomsday has not yet arrived. Bill McKibben examines two important questions: What if we already have inflicted serious damage on the planet? and, What if there are only a few decades left to salvage a stable environment? 2. Clash of Globalizations, Stanley Hoffmann, Foreign Affairs , July/August 2002 Stanley Hoffmann begins his analysis by briefly reviewing the main ideas of the 1990s that scholars and analysts used to explain and interpret the changes that occurred in the postcold war era, including a number of globalization processes, which he points out are often contradictory. Rather than being forces of integration, Hoffmann concludes that the clash of these processes creates new forms of conflict. The consequence is a puzzling international arena filled with paradoxes. 3. A New Grand Strategy, Benjamin Schwarz and Christopher Layne, The Atlantic Monthly , January 2002 Benjamin Schwarz and Christopher Layne challenge the emerging U.S. national security strategy that has been labeled "preponderance." They propose an alternative approach in which the United States would foster a so-called "multi-polar" world that is composed of a number of great powers. 4. Mr. Order Meets Mr. Chaos, Robert Wright and Robert Kaplan, Foreign Policy , May/June 2001 Two well-known observers of world affairs offer conflicting views of the path of history. Their contending views reflect the differing perspectives offered in this introductory section. UNIT 2. Population and Food Production 5. The Big Crunch, Jeffrey Kluger, Time , April/May 2000 A general overview is offered of the changing global demographic trends of fewer children and increased longevity. Jeffrey Kluger describes variations between different geographic regions and the varying patterns of consumption among the world's rich and poor. 6. Breaking Out or Breaking Down , Lester R. Brown and Brian Halweil, World Watch , September/October 1999 The spread of the HIV virus, aquifer depletion, and shrinking cropland have been growing trends for years. The magnitude of these problems now threatens to increase death rates in many of the world's poorest regions, raising the specter of social unrest and increased poverty. 7. Bittersweet Harvest: The Debate Over Genetically Modified Crops, Honor Hsin, Harvard International Review , Spring 2002 In this essay, the growing debate over genetically modifed crops is described with specific examples of both pro and con perspectives. Honor Hsin concludes that careful scientific research must be seriously considered in this debate rather than just corporate interests or public fears. UNIT 3. The Global Environment and Natural Resources Utilization 8. The Challenges We Face, Jeffrey Kluger and Andrea Dorfman, Time , August 26, 2002 In the summer of 2002, world leaders gathered in Johannesburg to debate what to do about threats to food, water, climate, and biodiversity. Jeffrey Kluger and Andrea Dorfman provide an overview of these issues and report on changing attitudes and approaches to facing these challenges. 9. The Heat Is On, Ralph Nader and Sallie Baliunas, The American Legion Magazine , January 2002 Two contending perspectives on the nature and scope of global climate change are presented. The alternative assumptions upon which the opposing views are based are given to provide insights into the political economy of energy. 10. We Can Build a Sustainable Economy, Lester R. Brown, The Futurist , July/August 1996 The world is faced with an enormous need for change in a short period of time. Human behavior and values, and the national priorities that reflect them, change in response to either new information or new experiences. Lester Brown asserts that regaining control of our destiny depends on stabilizing population as well as climate. UNIT 4. Political Economy Part A. Globalization Debate 11. The Complexities and Contradictions of Globalization, James N. Rosenau, Current History , November 1997 Globalization is a complex concept that means different things to different people. James Rosenau first defines the concept and then contrasts the process of globalization with localization. Rather than conclude that one force will prevail over the other, Rosenau argues that the two forces will contradictorily and simultaneously accommodate each other. 12. Dueling Globalizations: A Debate Between Thomas L. Friedman and Ignacio Ramonet, Thomas L. Friedman and Ignacio Ramonet, Foreign Policy , Fall 1999 Proponents of two distinct perspectives on the trends and challenges of the global political economy offer a spirited debate. The authors challenge each other's assumptions, raising interesting questions about the distribution of wealth, the power of governments, and the quality of life in the future. 13. Will Globalization Go Bankrupt?, Michael Pettis, Foreign Policy , September/October 2001 The author argues that global integration is driven not by politics, the Internet, or world trade but primarily by monetary expansion. "Credit booms," he argues, "spark periods of economic integration, while credit contractions squelch them." Is the world on the verge of another globalization bust? Part B. Case Studies 14. America's Two-Front Economic Conflict, C. Fred Bergsten, Foreign Affairs , March/April 2001 The complex relationship between the European Union, the United States, and the emerging East Asian free trade area is explored in this article. Challenges to the United States' leadership role in the global economy are described along with recommendations for U.S. policy. 15. What's Wrong With This Picture?, Mark Crispin Miller, The Nation , January 714, 2002 This article describes "the rise of an international media cartel. Of 10 highly integrated conglomerates, each has subsidiaries that include newspapers, publishing companies, television networks, movie studios, Internet providers, and even amusements. The author claims that the consequence of this concentration of economic power is a blurring of the distinction between entertainment and news reporting coupled with a reduction in the number of news sources. 16. Overcoming Japan's China Syndrome, Chi Hung Kwan, Journal of Japanese Trade & Industry , SeptJackson, Robert M. is the author of 'Global Issues 03/04', published 2003 under ISBN 9780072838572 and ISBN 0072838574.