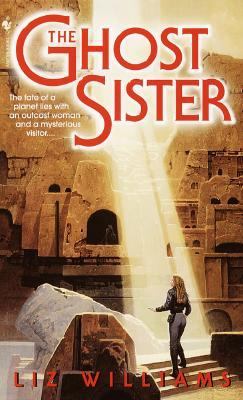 Prophecies and Falling Stars 1. Eleres I stepped into Mevennen's room to find my sister lying on the couch, her face drawn and lined with pain. The membrane flickered across her eyes in the pretense of sleep when she saw me, and she concealed something quickly beneath the folds of her dress. Her hand curled around it as she hid it away, but I could still see what it was: a handkerchief, spotted with blood. "Mevennen?" I said, trying to hide my dismay. "I've brought you some tea. The white kind, your favorite." She gave me a look that was half gratitude and half shame, then whispered, "Thank you," and turned her head away. I came to sit by her side. Her long hair, silvery like my own and with the same darker tips, fell untidily over her shoulders, and her skin seemed bleached by the dim light. We northerners are a pale people, our skin cloud-gray rather than the indigo of the south, but Mevennen was white as ashes now. I brushed her hair back from her forehead, and although I didn't want to shame her further, I gently prized the handkerchief from her hand. She had bitten through her lip, as sometimes happened in the throes of the seizures that she suffered, and the blood was welling up again; I could smell it. I reached out and wiped it with the handkerchief. "What is it, Mevennen? What's wrong?" "You know what's wrong, Eleres. The same thing that's always wrong." I took her hand, but she tried to pull it away. "Look," I murmured. "You shouldn't be ashamed of being ill." She didn't answer for a moment, and when she finally spoke, I could barely hear her. She said, "It's not just my ... my weakness. It's the fits. They're getting worse." "Worse? But you haven't been outside, have you?" I knew that Luta, thesatahrach,had told her to stay in the House. But even though the outdoors was so hard for her, Mevennen hated being cooped up and I could sympathize if she'd felt the need to slip out for some fresh air. "No ... I stayed indoors -- Luta would have been furious if I'd gone out. But I've still been having the fits, for nearly a week now. I think the storms bring them, on the tide. I can hear the sea rushing up the inlet against the wind, and then the lamp seems to spin and everything just ... goes away from me. This spring is the worst it's ever been. I've never had fits like this before..." Her voice trailed away and she sipped her tea. Her face was damp with sweat. "Eleres..." Her voice was a frightened whisper. "Everyone keeps telling me that maybe I'll get better, but I've been back from the wild nearly fifteen years now. How long is this going to go on?" And then I felt her hand clutch mine, in panic. "How long do you think I'm going to live?" "Oh, Mevennen," I said. I put my arm around her shoulders and pulled her close to me. "Mevennen, I know it's hard. But you'll live to be as old as thesatahrachherself, I'm sure of it." The words were barely out of my mouth before I realized what a cruel thing it had been to say. She looked up into my face and her eyes were bleak. She said, "It would be better if one of you had killed me, that first day, when I came home. That was what the family was going to do, wasn't it, until you and Luta stopped them? Don't think I don't know." Her hand slackened in my own and she closed her eyes. She murmured "And you and Luta shouldn't have to look after me all the time. No one else bothers, after all. Why should you?" She looked so vulnerable, but to my utter dismay I sensed something beneath my love and pity; something old and insistent and dark, that called for death ... My vision blackened and I looked abruptly down into the nightmare of the bloodmind. I took a deep, shaky breath. The room felt suddenWilliams, Liza M. is the author of 'Ghost Sister' with ISBN 9780553583748 and ISBN 0553583743.