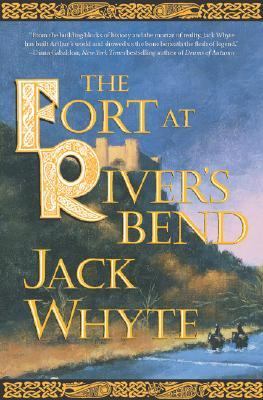 I We stood together on the forward deck of a galley that moved slowly forward through a bright, still September morning, mere months after the murderous incident that had almost taken the life of one of our number and had subsequently forced us to flee from Camulod in search of the safety we ought to have enjoyed at home. The large, square sail sagged limp in the languid, early-morning breeze that wafted the fog softly from the surface of the bay into which we drew, dispersing its drifting wreaths into nothingness. The oarsmen who propelled the vessel did so cautiously, their eyes intent upon the boatmaster, Tearlach, who directed them with arm and hand movements, his own eyes fixed on the wharf that stretched to meet us. I stood on the stern deck with the galley's captain, Connor Mac AtholConnor, Son of Athol, Son of Iain. Connor's father was the King of the Scots of Eire, the people whom the Romans had called the Scotii of Hibernia, and Connor of the Wooden Leg, as his men called him, was the king's admiral in the Southern Seas. I followed his gaze now to where two other galleys, one of them dwarfing its consort, lay already moored at the long wooden pier, on the side farther from us. They were unmistakablewarships like the one in which we rode, sleek and deadly in their aggressive linesand I could tell from Connor's face that they were not his. They seemed to be deserted, their massive booms angled at the tops of their masts and their sails furled and bound. Beside them, the score or so of fishing boats that shared the anchorage, at that main wharf and at the smaller pier built to the south, seemed tiny. I glanced back to Connor. "Whose are they?" His face betrayed nothing of what he thought, but his tone betrayed tension. "They are Liam's. The Sons of Condran." "What will you do?" "Nothing. Ignore them. Then leave before they do." "That one is huge, larger than this." "Aye, it ships forty-eight oars to our thirty-six. That's Liam's own galley." "And? Will you fight them?" His features creased in a wintry little smile. "Probably, but not here. Not in Ravenglass. This is neutral ground." "Forgive me, I don't understand. What does that mean?" He turned his head now to look at me. "Simply what it says. This is the only harbour in the entire north-west where ships can call and provision themselves in safety. It has always been that way, since the day the Romans built the fort. All warfare ceases once a ship enters this bay, otherwise it is denied entry. The fort, there, as you can see, is walled and occupied. It can't be taken from the sea, nor can it be surprised from overland, so it sits inviolate and inviolable, and all men use it as a base for gathering provender. We'll rub shoulders with Liam's men inside the town, but we'll ignore them, as they will ignore us. If any trouble does break out, the party causing it will be denied reentry in the future. No trouble ever surfaces within the town." He smiled again. "Of course, when two groups such as ours meet here, it creates a certain tension when the time arrives to leave." "How? You mean there's an advantage to being the first to leave?" "Aye, there is. The same advantage that the smith has over the iron he works. He may swing his hammer as hard as he wishes, and the iron is pressed flat against the anvil. The coast becomes the anvil when you are the last ship out." "But you have three ships to their two." "I do, and that may make the difference. WeWhyte, Jack is the author of 'Fort at River's Bend The Camulod Chronicles', published 2004 under ISBN 9780765309051 and ISBN 076530905X.