Face on the Milk Carton

by Cooney, Caroline B. 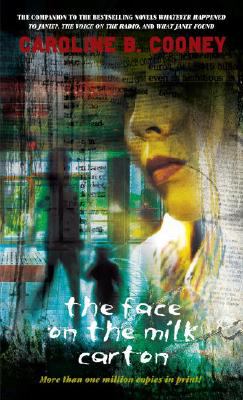 by Cooney, Caroline B.

Janie finished her essay. She never knew what grade she would get in Mr. Brylowe's English class. Whenever she joked, he wanted the essay serious. Whenever she was serious, he had intended the essay to be lighthearted. It was October. Outdoors throbbed with autumn. She could feel the pulse of the deep-blue skies. With every leaf wrenched off its twig and whirled by the wind, Janie felt a tug. She felt like driving for hours; taking any road at all; just going. Actually Janie was only fifteen and had barely started driving lessons. She was having driving fantasies because of dinner last night. Her parents--as always--had taken opposite sides. Setting themselves up like a debate team, her mother and father would argue until some invisible marital timer rang. Then they would come to terms, rushing to meet in the middle. Until last night her mother had said Janie could begin driving while her father said she could not. "She's just a baby," said her father, in the infuriating, affectionate way of fathers. "She's old," said Janie's mother lightly. "Practically a woman. A sophomore in high school." "I hate when that happens," her father grumbled. "I like my little girl to stay little. I'm against all this growing up.' He wound some of Janie's hair around his wrist. Janie had fabulous hair: a wild, chaotic mane of red curls glinting gold. People always commented on it. As her best friend, Sarah-Charlotte, said, "Janie, that is serious hair." "I guess you've grown up anyway, Janie," said her father reluctantly. "Even with all the bricks I put on your head to keep you little. Okay, I give in. You can drive." In English, Janie smiled to herself. Her father was an accountant who in the fall had time to coach the middle-school soccer teams. Today after school he'd have a practice, or a game, but when he came home--they'd go driving! She wrote her name on her essay. She had gradually changed her name. "Jane" was too dull. Last year she'd added a "y," becoming Jayne, which had more personality and was sexier. To her last name--Johnson--she'd added a "t," and later an "e" at the end, so now she was Jayne Johnstone. Her best friends--Sarah-Charlotte Sherwood and Adair O'Dell had wonderful, tongue-twisting, memorable names. Why, with the last name Johnson (hardly a name at all; more like a page out of the phone book) had her parents chosen "Jane"? They could have named her Scarlett, or Allegra. Perhaps Roxanne. Now she took the "h" out of Johnston and added a second "y" to Jayne. Jayyne Jonstone. It looked like the name you would have if you designed sequined gowns for a living, or pointed to prizes on television quiz shows. "Earth to Janie," said Mr. Brylowe. She blushed, wondering how many times he had called her. "The rest of us are reading our essays aloud, Janie,' said Mr. Brylowe. "We'd like to issue an invitation for you to join us." She blushed so hotly she had to put her hands over her cheeks. "Don't do that," said Pete. "You're cute when your face matches your hair." Immediately, the back row of boys went into barbershop singing, hands on hearts, invisible straw hats flung into the air. "Once in love with Janie," they sang. Janie had never had a boyfriend. She was always asked to dances, was always with a crowd--but no boy had actually said I want to be with you and you alone. Mr. Brylowe told Janie to read her essay aloud. The blush faded. She felt white and sick. She hated standing up in class. Hated hearing her voice all alone in the quiet of the room. The bell rang. English was a split period: they had lunch in the middle and came backCooney, Caroline B. is the author of 'Face on the Milk Carton', published 1991 under ISBN 9780440220657 and ISBN 0440220653.