Every Woman Needs a Wife 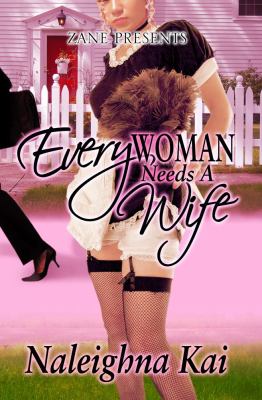 Chapter One "I could kill both of you," she said softly. "I'd probably go to jail, but I certainly won't feel guilty..." Brandi Spencer turned the key in the ignition, still trying to come up with a good opening line as she braced herself to walk in on her husband and his mistress. Killing them would be too quick and painless. She wanted them to suffer. Settling into the black leather seat, she tried something else. "Heifer, what the hell do you think you're doing with my husband?" No, too common and too weak. She'd have to use something a bit stronger thanheifer. "Vernon, do you think I'm stupid? Did you think I wouldn't find out?" That was lame and overused. She had let this thing ride for six months before deciding to confront him. "Since I'm paying for half of this affair, what's in it for me?" That might work! Fingers of doubt sent a chill through her; she knew Vernon would have every excuse in the book. The fading sunlight cast a subdued glow into the car. Leaning back in the cool seat, she realized that asking for a divorce while the woman he'd been sneaking around with for the past six months was looking on wouldn't leave him any breathing room. And she didn't mind one bit if he choked on what she was about to serve up.Ifshe could find the courage. She reached into her purse, grabbed her equipment, and placed it in her bra, tucking it out of sight. Brown and yellow leaves danced in the chilly October wind as Brandi left the security of her car and inched her way toward what could be a total liberation or her worst nightmare. Doing the unthinkable tugged at her mind, but common sense kicked in. How long would the pleasure from killing them last? She had to find a better way. Walking up the cobblestone path, she gazed at the house her accountant said Vernon had paid for out of their business account. Taking a long, slow breath, she knocked on the wooden door. Moments later, a tall, blonde with deep-set blue eyes and a curvaceous figure some women would give an ovary to have, appeared in the doorway. She was wearing a sheer red robe and not much else. Gathering her strength, Brandi abandoned her rehearsed lines. "Good evening, Tanya. I'd like to speak with you and my husband," she said, breezing past the mistress into a spacious, tastefully furnished living room. "Husband? Wait a minute," the woman shrieked, grabbing for Brandi, who shimmied just out of reach. "You must have the wrong house. Your husband's not here." "Oh, yes he is," Brandi shot back, outrage fast replacing fear as she stood facing Vernon -- a man whose charisma, handsome face, and tall, muscular build had put moisture in the driest panties. "That man right there on your sofa is actually married...to me." Brandi flashed her wedding ring in the woman's face before venturing further into the room. The table had been set with a candlelight dinner for two. The scent of grilled steak, mashed potatoes, and apple cobbler mingled with the fresh citrus smell of the house. Somehow, Brandi didn't think that the cozy little dinner would grace Tanya's lips -- or Vernon's. A quick glance at the mistress showed a flash of pink coloring the woman's high cheekbones before her sensuous red lips tightened into a hard line. She was strikingly pretty, with a heart-shaped face and classically pert nose. She looked as though she belonged on the pages ofCosmoorVoguerather than hidden away in a bungalow on the south side of Chicago. Vernon, dressed in a casual suit that complemented his warm brown skin, short-cropped hair, and piercing dark brown eyes, had been lounging comfortably on a plush maroon sofa in the living room when Brandi stormed in. He had one leg thrown over the arm, a glass of cognac in one hand and a remote control in the other. He quickly switcheKai, Naleighna is the author of 'Every Woman Needs a Wife', published 2006 under ISBN 9781593090609 and ISBN 1593090609.