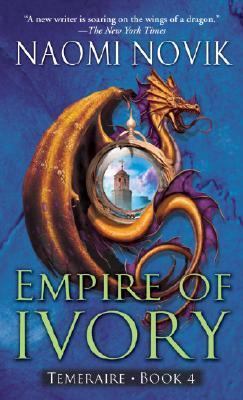 Chapter 1 Send up another, damn you, send them all up, at once if you have to," Laurence said savagely to poor Calloway, who did not deserve to be sworn at: the gunner was firing off the flares so quickly his hands were scorched black, skin cracking and peeling to bright red where some powder had spilled onto his fingers; he was not stopping to wipe them clean before setting each flare to the match. One of the little French dragons darted in again, slashing at Temeraire's side, and five men fell screaming as a piece of the makeshift carrying-harness unraveled. They vanished at once beyond the lantern-light and were swallowed up in the dark; the long twisted rope of striped silk, a pillaged curtain, unfurled gently in the wind and went billowing down after them, threads trailing from the torn edges. A moan went through the other Prussian soldiers still clinging desperately to the harness, and after it followed a low angry muttering in German. Any gratitude the soldiers might have felt for their rescue from the siege of Danzig had since been exhausted: three days flying through icy rain, no food but what they had crammed into their pockets in those final desperate moments, no rest but a few hours snatched along a cold and marshy stretch of the Dutch coast, and now this French patrol harrying them all this last endless night. Men so terrified might do anything in a panic; many of them had still their small-arms and swords, and there were more than a hundred of them crammed aboard, to the less than thirty of Temeraire's own crew. Laurence swept the sky again with his glass, straining for a glimpse of wings, an answering signal. They were in sight of shore, the night was clear: through his glass he saw the gleam of lights dotting the small harbors all along the Scottish coast, and below heard the steadily increasing roar of the surf. Their flares ought to have been plain to see all the way to Edinburgh; yet no reinforcements had come, not a single courier-beast even to investigate. "Sir, that's the last of them," Calloway said, coughing through the grey smoke that wreathed his head, the flare whistling high and away. The powder-flash went off silently above their heads, casting the white scudding clouds into brilliant relief, reflecting from dragon scales in every direction: Temeraire all in black, the rest in gaudy colors muddied to shades of grey by the lurid blue light. The night was full of their wings: a dozen dragons turning their heads around to look back, their gleaming pupils narrowing; more coming on, all of them laden down with men, and the handful of small French patrol-dragons darting among them. All seen in the flash of a moment, then the thunderclap crack and rumble sounded, only a little delayed, and the flare dying away drifted into blackness again. Laurence counted ten, and ten again; still there was no answer from the shore. Emboldened, the French dragon came in once more. Temeraire aimed a swipe which would have knocked the little Pou-de-Ciel flat, but his attempt was very slow, for fear of dislodging any more of his passengers; their small enemy evaded with contemptuous ease and circled away to wait for his next chance. "Laurence," Temeraire said, looking round, "where are they all? Victoriatus is in Edinburgh; he at least ought to have come. After all, we helped him, when he was hurt; not that I need help, precisely, against these little dragons," he added, straightening his neck with a crackle of popping joints, "but it is not very convenient to try and fight while we are carrying so many people." This was putting a braver face on the situation than it deserved: they could not very well defend themselves at all, and Temeraire was taking the worst of it, bleeding already from many small gashes along his side and flanks, which theNovik, Naomi is the author of 'Empire of Ivory Temeraire - Book 4', published 2007 under ISBN 9780345496874 and ISBN 0345496876.