Dollmakers and Their Stories Women Who Changed the World of Play 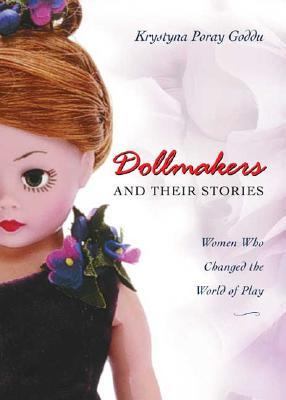 from DOLLMAKERS AND THEIR STORIES: Women Who Changed the World of Play Ruth Handler (1916-2002) A self-proclaimed tomboy, Ruth Mosko Handler steered clear of dolls when she was a girl. Her favorite playmates were her older brothers Muzzy and Aaron. But her favorite pastime, by the age of ten, was what her husband, Elliot, called "a grown-up activity." "Ruthie loved to work," recalled brother Aaron, and Ruth confirmed this in her autobiography, Dream Doll. "I simply preferred working over playing with other kids," she wrote of her childhood in Denver, Colorado. This lifelong love, combined with her instinctive need to rise to any challenge, helped her create the best-known American toy company in the world-Mattel-and the revolutionary fashion doll that became an international household word: Barbie. The tenth child of Jewish immigrants from Poland, Ruth Mosko was born in Denver, Colorado, on November 4, 1916. Her father, blacksmith Jacob Moskowicz, had landed on Ellis Island, the point of arrival for immigrants in the first half of the twentieth century, in 1907. Like many, he underwent an identity transformation on Ellis Island. Harried officials turned him into Jacob Mosko and put him on a train to Denver, where blacksmiths were much in demand for development of the Union Pacific Railroad. Ruth's mother, Ida, stayed behind in Warsaw with their six children until enough money had been saved to bring them to America. In 1908 Ida, with the help of her oldest, twelve-year-old Sarah, brought the five younger children, Reuben, Lillian, Louise, Doris, and Max, on the arduous journey across the Atlantic Ocean, and the family was reunited in Denver. The last four children, Joe, Aaron, Maurice (known as Muzzy), and Ruth, were born in the family's new hometown. Ida gave birth to Ruth at the age of forty. Sarah was twenty by then and newly married. When Ida needed surgery six months after Ruth's birth, Sarah took over the care of her infant sister, bringing her to the home she shared with her husband, Louie Greenwald. Ruthie never left. She grew up in Sarah and Louie's home, though she visited the rest of her family regularly. "The doors were never locked, and nobody had a key. They were always coming over," Aaron Mosko remembered. "We often had dinner together as a family." None of them found it strange that Ruthie lived with Sarah. "You see," he explained, "we had a large, ten-bedroom house, but it only had one bathroom. Sarah's home was nicer than ours, and it was just a few miles away." Sarah and Louie never had any children of their own, so Ruth lived the life of an only child in their home-but one with a loving brood of siblings nearby. While love was strong between her and her parents ("I called them Ma and Pa," Ruth remembered, and she thought of them as "loving, indulgent grandparents"), communication was often difficult. Yiddish was the Mosko family language, and English was Ruth's. She spent much of her early childhood playing with Aaron and Muzzy. "The three of us were always together," Aaron recalled. "We were very close. Ruthie was the kind of kid who would do anything for anybody." Ruth claimed that Sarah was "the greatest influence on the woman I was to become. She was a fantastic role model," Ruth wrote, "and I absolutely idolized her." "They were like mother and daughter," Elliot remembered. Although Sarah lacked any formal education, she had an acute business sense, and when Ruth was nine, Sarah and Louie bought a drugstore, which Sarah managed, across the street from Denver General Hospital. Like many drugstores in those days, it was not only a pharmacy but also a soda fountain, where people came for soft drinks as well as ice cream, coffee, and sandwiches. Being a good "mother" as well, Sarah often gave Ruth dolls, trying, but always failing, to entice her little sister into traditional childhood play. By the time Ruth was ten yearsGoddu, Krystyna P. is the author of 'Dollmakers and Their Stories Women Who Changed the World of Play', published 2004 under ISBN 9780805072570 and ISBN 0805072578.