Dictionary of the Ancient Near East 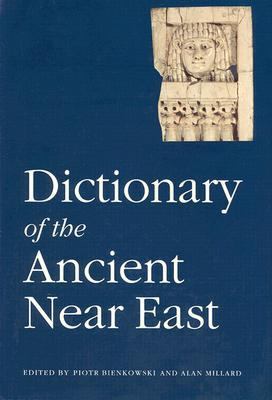 Selected byChoicemagazine as an Outstanding Academic Book, 2000 The earliest farms, cities, governments, legal codes, and alphabets developed in the ancient Near East. Four major religions--Judaism, Zoroastrianism, Christianity, and Islam--began in the region. Ideas, inventions, and institutions spread to all parts of the globe from the urban centers of the ancient Egyptians, Syrians, Hittites, Assyrians, Babylonians, and other peoples of the biblical world. For good reason is the ancient Near East known as the cradle of civilization. The only single-volume dictionary to embrace the whole of the ancient Near East, this major reference work covers Anatolia, Mesopotamia, the Levant, and the Arabian peninsula from the earliest times, through the Old Testament period, until the fall of Babylon to the Persians in 539 B.C. From "Achaemenids" to "Ziwiye," "administration" to "ziggurat," in 500 concise, cross-referenced, and comprehensively indexed entries, theDictionary of the Ancient Near Eastdescribes and explains the major ideas, institutions, places, peoples, and personalities that shaped the earliest development of Western civilization. Architecture, literature, economics, labor, religion, and society are all extensively treated, as are such subjects as crime, dreams, drunkenness, shipwrecks, and sexual behavior (and misbehavior). Each entry, written by a scholar of international standing, includes up-to-date bibliographic references. The book is richly illustrated with photographs, maps, and plans of major sites. Contributors: Douglas Baird (Lecturer in Near Eastern Archaeology, University of Liverpool), Jeremy Black (University Lecturer in Akkadian, Oriental Institute, Oxford University), Paul T. Collins (freelance lecturer in the Ancient Near East, London), Stephanie Dalley (Shillito Fellow in Assyriology, Oriental Institute, Oxford University), Anthony Green (Lecturer in Near Eastern Archaeology, Free University of Berlin), Gwendolyn Leick (Lecturer in Anthropology, the American International University, London), Michael Macdonald (Research Fellow, Oriental Institute, Oxford University), Roger Matthews (Director, British Institute for Archaeology, Ankara), Gerald L. Mattingly (Lecturer, Johnson Bible College, Knoxville, Tennessee), Graham Philip (Lecturer in Archaeology, University of Durham), Geoffrey Summers (Lecturer in Archaeology, Middle East Technical University, Ankara).Bienkowski, Piotr is the author of 'Dictionary of the Ancient Near East' with ISBN 9780812235579 and ISBN 0812235576.