by Davis, Patrick A. 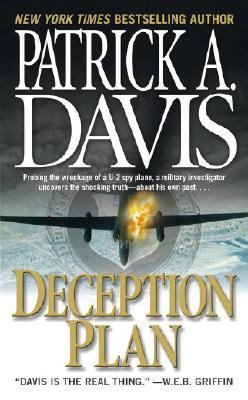 by Davis, Patrick A.

1 SIX MONTHS LATER, OVER THE PACIFIC OCEAN From somewhere above the droning noise, Colonel Ed Coffin became dimly aware someone was calling him. Then he felt a hand shake his shoulder. "Colonel, sir. Wake up. Sir..." Colonel Coffin's eyes cracked open. He was lying in a darkened metallic tube and an attractive young woman with boyishly cropped red hair and wearing an even more boyish-looking flight suit was peering down upon him with concern. "Jesus," she said, smiling with relief. "You had us worried. I'm been trying to wake you for the past five minutes, sir." "Wake me? Give me a second." His groggy mind slowly processed his surroundings. Open walls filled with wiring, cargo pallets wedged around him, the telltale hum of engines. It clicked; he was the lone passenger on a C-141 military transport, flying from Hickam Air Base, Hawaii, to Korea. Easing upright from the web seats he'd been lying on, he smiled apologetically at the woman. As the plane's loadmaster, she was responsible for the cargo and the care and feeding of passengers. "I took a sleeping pill, Sergeant," Coffin said. "Guess it worked." "I'll say, sir. You been out for almost seven hours." Her eyes lingered on his with more than a passing interest. It was a reaction Colonel Coffin was accustomed to, and not only from women. People were curious about his ethnicity -- his mother was Asian, his father white -- and the mismatch between his youthful appearance and the eagles on his blue Air Force uniform. With his black hair, spare frame, and boyish good looks, Ed Coffin just didn't look old enough to be a full colonel. But at forty-three, he was. "The pills were prescription. Migraines." Rubbing the sleep from his eyes, Coffin glanced out a window. It was a clear night, and peering downward, he was surprised to see they were still at cruise altitude, well out over the water. "We're not landing?" "Not for another two hours, Colonel." "Two hours?" Coffin felt a trace of irritation. "Mind telling me why you woke me?" But the loadmaster had keyed the mike on her headset. "The colonel's okay, Captain Beale. You want him up front or -- " Motioning Coffin forward, she said, "Go on up to the cockpit, sir. Captain Beale's reinitiating the phone patch now." "Phone patch?" "Osan Command Post, sir. They want to talk to you." She waited expectantly, but instead of rising, Coffin removed a battered Korean-English dictionary from his shirt pocket and began studying it. The seconds passed. A minute. Coffin kept reading. The loadmaster began a nervous two-step; he pointedly ignored it. Listening to her headset, she finally said to Coffin, "Sir, Captain Beale has the CP on the line." "Congratulations," Coffin grunted, without looking up. Her mouth cycled open and closed. As a sergeant, she certainly couldn't order Coffin forward. "Right," she said into the mike, "I told him, Captain Beale. But the colonel doesn't seem to want to -- " "Correct, Sergeant," Coffin interrupted her. "Tell Captain Beale to relay to the CP that I'm on leave for the next week." She relayed the message. To Coffin, "Sir, the CP says it's urgent." "It isn't." Coffin knew precisely what the problem was; he'd even anticipated this eventuality. A fast burner in the promotion game, Ed Coffin had spent his twenty-year career carefully choosing assignments with the sole purpose of making rank. A master at manipulation and blessed with natural charm, he'd pinned on full colonel years ahead of his peers. Setting his eyes on the next rung of the ladder, Coffin had lobbied to become a four-star general's executive officer -- a crucial job because it guaranteed him a powerful sponsor. After a few years of filling squares in various command billets, Coffin finally landed his coveted exec job, working for General Marvin Ford, the four-star in charge of all Pacific Air Forces. For the pDavis, Patrick A. is the author of 'Deception Plan ', published 2006 under ISBN 9780743499767 and ISBN 074349976X.