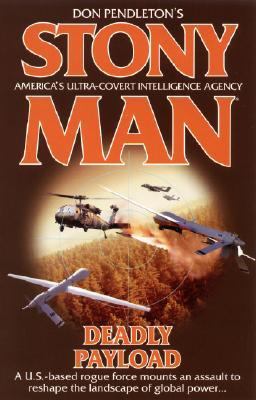 "So why are we investigating the destruction of a terrorist camp in Syria again?" T.J. Hawkins whispered to Calvin James as the Zodiac boat hummed toward the Lebanese coast. "If you ask me--""Well, I didn't," James retorted."Well, if you did, whoever took them out did us a favor," Hawkins answered."Really, mate?" David McCarter asked as he scanned the shore with his field glasses. "A chemical weapons attack on an unfriendly country, using American materials. That's a favor to the U.S.' I'd hate to see what you'd call a slap in the face.""The PFRLL were some of the sickest bastards in the Lebanese equation, though," Hawkins stated. "They never cared about civilian casualties when they made their attacks. It'd have been our job, sooner or later, to take them out.""Sooner or later, sure," Rafael Encizo answered as he worked the rudder's till, keeping them on course despite a crosscurrent. "But then, we also need to figure out who has a small automated air force. The drones responsible for the attack could end up in the hands of someone who might turn them against a city.""Well then, that'd be a whole new mess o' pig shit," Hawkins admitted.Encizo nodded, returning his attention to guiding the inflatable raft. The muscular little Cuban's steady steering was born of years spent by the sea, either diving or working boats. Between him and Calvin James, Phoenix Force had the training to handle almost anything on the water. The inflatable raft would be collapsed on the shore and buried before they went inland. If necessary, the raft could be dug up and used to exfiltrate from the country, but Mc-Carter had other avenues out of Lebanon, just in case the investigation took them on a new path."Welcoming party," Gary Manning announced as he spied the beach through the scope of his Heckler & Koch PSG-1 rifle.Hawkins's hand tightened on the grip of his G-36, but his trigger finger rested on the receiver."Keep your booger hook off the bang switch," he remembered his drill instructor bellowing in basic training. It was second nature for the Southerner, by now. Even as a Ranger, he practiced as a professional, not until he got it right once, but until he never got it wrong. That mentality was pushed even further as a veteran member of Phoenix Force, one of the most elite combat units in the world. The five handpicked Stony Man warriors had been chosen for their experience and ability. All of them were highly trained commandos."They spot us yet?" McCarter asked Manning."No. They seem to be waiting for someone else," Manning said. "Their attention is more to the north."McCarter drew his finger across his throat and the Stony Man commandos fell silent. Only the muffled Mercury engine made any sound, and even then, it was a soft hum that was easily swallowed by the lap of waves. Phoenix Force lowered its profile, lying in the bottom of the raft, only Encizo and Manning breaching the tops of the inflated Kevlar pontoons to steer and to observe the mysterious group on the shore.McCarter pointed to James and patted the grip of his knife. He nodded to Encizo. The stocky Cuban flicked a thumbs-up to the fox-faced Briton and adjusted their course a little farther to the south.So much for the plan of burying the raft, Hawkins mused. With unknown forces on the shore, they would have to scuttle the inflatable raft, slashing through the rigid nylon pontoons. The weight of the motor would drag it down, and Phoenix Force would swim a hundred yards to shore.Hawkins fed Encizo's rifle into a water-tight bag, since he was steering. He did the same for Manning's PSG-1, while the powerfully built Canadian switched to McCarter's field glasses to maintain surveillance of the unknown enemy."There," Encizo stated softly. He turned off the engine and James slashed the inflated tubes to starboard while McCarter took out the port side. The raft collapsed almost instantly, Mediterranean seawater rushing in and enguPendleton, Don is the author of 'Deadly Payload (Stony Man Series #93)', published 2008 under ISBN 9780373619771 and ISBN 0373619774.