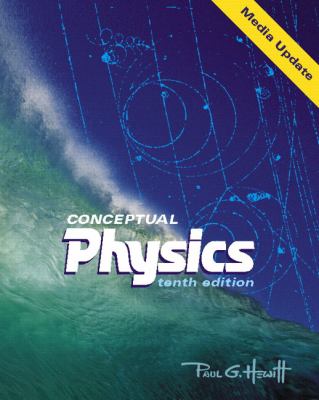 Since defining this course 30 years ago, Paul Hewitt's best-selling text continues to be the benchmark book that two-thirds of professors use and by which all others are judged. In Conceptual Physics Media Update, Tenth Edition, Paul Hewitt shows how a compelling text and the most advanced media can be integrated to empower professors as they bring physics to life for non-science majors, both in and out of class. About Science, Newton's First Law of Motion: Inertia, Linear Motion, Newton's Second Law of Motion: Force and Acceleration, Newton's Third Law of Motion: Action and Reaction, Momentum, Energy, Rotational Motion, Gravity, Projectile and Satellite Motion, Atomic Nature of Matter, Solids, Liquids, Gases and Plasmas, Temperature, Heat and Expansion, Heat Transfer, Change of Phase, Thermodynamics, Vibrations and Waves, Sound, Musical Sounds, Electrostatics, Electric Current, Magnetism, Electromagnetic Induction, Properties of Light, Color, Reflection and Refraction, Light Waves, Light Emission, Light Quanta, The Atom and the Quantum, Atomic Nucleus and Radioactivity, Nuclear Fission and Fusion, Special Theory of Relativity, General Theory of Relativity. Intended for those interested in learning the basics of Conceptual PhysicsHewitt, Paul G. is the author of 'Conceptual Physics', published 2008 under ISBN 9780321548092 and ISBN 0321548094.