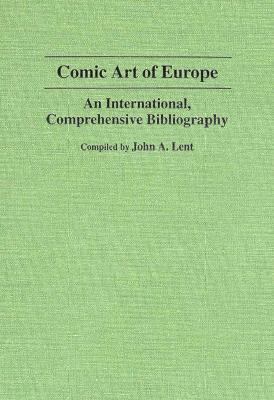 Encompassing 29 countries of Europe, this detailed bibliography covers the field of comic art. European academicians and journalists began the study of comic art earlier than their counterparts in other areas of the world. This volume reflects those efforts as well as the substantial growth of contemporary writings. Art Historian David Kunzle introduces the work, thus acknowledging the importance of Europe's lead in the scholarship of comic art in all its forms. This is one of four volumes dealing with various regions of the world in an attempt for the first time to present a comprehensive, international study of comic art scholarship. Chapters are country(ies) specific, except for the first, which includes continental, regional, and comparative perspectives. A feature of chapter one is its resources component, including an annotated directory of 81 comic art-related periodicals. Because of an unusually large number of sources, the chapters on Belgium, France, Germany, Great Britain, and Italy were expanded and subcategorised beyond historical and contemporary perspectives and specific comic art forms. Thus, many citations appear under categories of children's press, festivals, humor periodicals, anthologies, art and aesthetics, cinema, education and culture, effects debate, genres, industry, language and semiotics, legal aspects, literature, psychology, religion, socio-cultural aspects, and technical aspects. Additionally, more than 250 individual cartoonists and over 110 characters and titles were given separate categories. Art Historian David Kunzle, who has written the definitive histories of comic art precursors, wrote a personalized foreword. A preface delineating the unique characteristics of the book and complete indices conveniently divided by authors, cartoonists, characters and titles, periodicals, and subjects are provided.Lent, John A. is the author of 'Comic Art of Europe An International, Comprehensive Bibliography' with ISBN 9780313282126 and ISBN 0313282129.