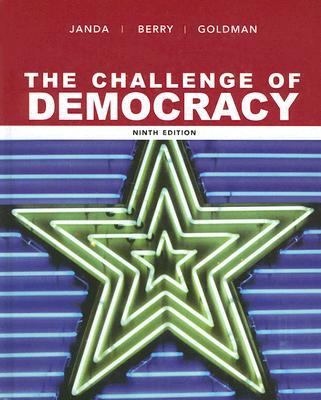 This best-selling, mainstream American government text is both a comprehensive introduction and a complete program, with the print text and ancillaries carefully crafted to work together to benefit both instructor and student. The Ninth Edition maintains its highly acclaimed, non-ideological framework, exploring three themes: freedom, order, and equality as political values; the majoritarianism vs. pluralism debate; and globalization's effect on American politics. Extensively updated, this edition includes new examples, figures, and data and current discussions on such topics as the 2006 Congressional election, the Bush administration, campaign finance reform, Hurricane Katrina and FEMA, immigration policy, MEDICARE, and more.Continuing to offer leading-edge technology for teaching and learning, the program now offers course content in Eduspace, Blackboard, and WebCT formats and "In Our Own Words"--downloadable chapter overviews in MP3 format narrated by the authors. Additional proven media tools include "Talking Politics" audio clips and marginal references to the award-winning site, IDEAlog.org."New!" Eduspace/Blackboard/WebCT online course content includes an interactive eBook, customizable graded homework and quizzes, primary source documents, Associated Press Interactive animations, simulations, writing assignments and tutorials, discussion assignments, a threaded message board, and video clips of election ads."New!" Revised and updated Chapter 5, "Public Opinion and Political Socialization," features updated information on religion, the role gender played in the 2004 presidential election, and the death penalty."New!" Reorganized Chapter 9, "Nominations, Elections, andCampaigns," offers revised coverage of campaign finance to include information on campaign spending during the 2004 and 2006 elections."New!" Revised and updated material in Chapter 10, "Interest Groups," presents new material on 527s, recent lobbyist scandals, and interest groups with no membership."New!" Updated Chapter 12, "The Presidency," addresses the second George W. Bush administration, including the president's relationship with Congress and 2006 midterm election results."New!" Revised Chapter 17, "Policymaking," highlights the latest on FEMA, Medicare, and legislating life and death issues (as in the case of Terri Schiavo).Current, relevant chapter-opening vignettes, nearly half of which are new to the Ninth Edition, introduce chapter topics and capture student interest."Politics in a Changing World" boxes focus on the effect of globalization on American government by comparing how US politics affects the world and vice versa. These highlighted features appear in every other chapter, alternating with "Looking to the Future.""Can You Explain Why" marginal features challenge students to use their critical-thinking skills to explain paradoxical political situations and/or concepts."Looking to the Future" invites students to consider trends in American government such as declining voter turnout, or to evaluate questions, such as whether federal government is shrinking or expanding, and then to consider the implications of their answers."Talking Politics" audio clips, found on both the Online Teaching and Study Centers and the student and instructor CDs, allow students to hear American politics in action through speeches and interviews."Compared With What"? features in eachchapter, nearly 50 percent new or revised, encourage students to evaluate our political system as compared with those of other countries.A new set of marginal tie-ins to IDEAlog.com directs students to this award-winning interactive site for analysis relevant to the chapter content.Janda, Kenneth is the author of 'Challenge of Democracy ', published 2006 under ISBN 9780618810178 and ISBN 061881017X.