Brothel Boy and Other Parables of the Law 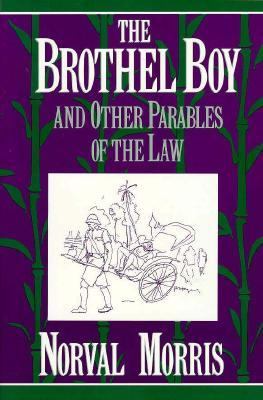 The mystery does not always end when the crime has been solved. Indeed, the most insolvable problems of crime and punishment are not so much who committed the crime, but how to see that justice is done. Now, in this illuminating volume, one of America's great legal thinkers, Norval Morris, addresses some of the most perplexing and controversial questions of justice in a highly singular fashion--by examining them in fictional form, in what he calls "parables of the law." The protagonist of these stories, the figure who must see that justice is done, is Eric Blair, a name familiar to most readers: it's the real name of George Orwell. In fact, Morris has set his tales in the time and place of Orwell's famous essay, "Shooting an Elephant," in Moulmein, Burma, in the 1920s. What might seem a curious strategy at first glance--borrowing Orwell's persona to narrate these tales--is actually a brilliant stroke. For in Eric Blair we have an ideal narrator to highlight the complexities of justice: an untrained police lieutenant and junior magistrate, uncertain of judgement--and all the more likely to anguish over judgement, and to examine every facet of a case before deciding. And in 1920s Moulmein we have a neutral time and space in which to consider--free of our own political, religious, or social prejudices--a set of contemporary legal and moral questions that rarely find so calm an arena. And these stories certainly address some highly charged issues--capital punishment, insanity as a murder defence, the "battered wife syndrome" as a murder defence, child custody, "parental neglect" due to religious conviction--to name a few. In each tale, Norval Morris excels at placing Blair at the centre of a controversy that has no easy answer, and that he and he alone must decide. In the title story, for instance, a retarded boy, whose only understanding of sex comes from the brothel in which he works, accidentally murders a young girl while raping her, his only defence being "Please sir, I paid her." Blair can see that the boy doesn't realize that he has committed a crime, but both the Burmese and the European community of Moulmein demand the boy's execution. Does capital punishment make sense in such an instance? Does it ever make sense? To broaden our understanding of these intricate cases, Morris concludes each story with a perceptive and often provocative commentary on each issue. After "Brothel Boy," for instance, Morris points out that no reputable study has ever shown capital punishment to be an effective deterrent to future murders, and more surprisingly, that paroled murderers commit proportionately fewer homicides than paroled felons who used a firearm in the commission of their crime. Norval Morris is one of America's foremost experts on crime and punishment, and the stories collected here represent the culmination of a lifetime of thought on the major criminal law debates of our time. A reader of these tales will come away with a deeper understanding of these debates and with a profound respect for the intricacies of justice and the complexity of the law.Morris, Norval is the author of 'Brothel Boy and Other Parables of the Law', published 1994 under ISBN 9780195093865 and ISBN 0195093860.