Blood Is the New Black 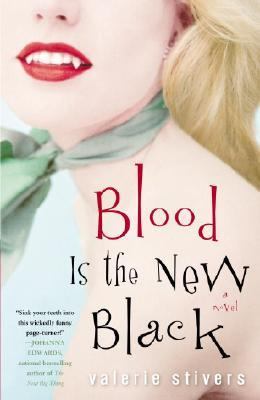 1 Clothes to Die For Darling, you remember Lillian Hall. You met her last month when you were in New York with me. Remember? In Bryant Park? The one who took such an interest in you? Well, I just bumped into her in Milan--she was staying at my hotel, which I thought odd because the editors are usually at the Ferragamo, but that's beside the point. I could hardly believe it myself, but she offered you an internship at Tasty." My heart drops. I clearly remember Lillian Hall--a cold, gorgeous, acerbic woman who scared the crap out of me. "You are familiar with Tasty, yes? It's the hottest young women's magazine in America. Lillian Hall took it over and re-launched it six months ago. The circulation has gone through the roof," my aunt rattles on without pause. Her telephone manner is rapid-fire at the best of times. I used to have a theory that my aunt Victoria arranges things for me out of guilt, because she knows where my mother is and isn't telling me. But now I try not to think that way. I try to think of her as a woman who married very well later in life, chose not to have children, and regrets that a little. "This is my last summer before med school. Are you honestly suggesting that I drop everything and get a job at a fashion magazine?" I ask. "Wouldn't that be flighty of me?" "Believe me, darling," Victoria says, "you are in no danger of being flighty." I don't quite know what to feel. As my aunt well knows, fashion and I have a long, tortured history. My mother, Eva, was a designer, and her successes and failures in that field led our family to . . . well, where things ended up. With Eva being who she was, I grew up sewing. And I still do frequently go all Pretty in Pink and knock out a sundress or repurpose a thrift-store find into something original. I'm also more aware of the world of high fashion than most twenty-three-year-olds with no money, living at home with their dads, and taking the MCATs are. I jest. I'm completely, obsessively aware of the world of high fashion. I moon over unaffordable brands like Alberta Ferretti, Thakoon, Mint. I love how Zac Posen constructs his garments. I respect how the folks behind Martin Margiela deconstruct theirs. And I think Marni makes clothes to die for. However, I'm not going to follow in my mother's footsteps. I want a career where hard work guarantees you a job, safety, respect. Where you're in no danger of being called "contrived" or "out-of-step" in the newspaper. Where you don't spend all your time trying to impress a bunch of shallow bloodsuckers. "I'm flattered," I tell Victoria. "But there are lots of people who would . . . enjoy that environment more than I would." There is a long, chilly pause during which I remember that Victoria pays my student loans. She sighs. "This kind of opportunity doesn't come twice. Oldham Inc.--that's the media empire that publishes Tasty--gets hundreds of resumes for every position. And they don't even look at them. A rich plum like an Oldham internship is only achieved through connections. Lillian noticing you was kismet." It was eerie, actually. Victoria had taken me to a benefit dinner in Manhattan--she's a society dame; her every bite raises money for something--and on the way out of the Bryant Park Grill we crossed paths with Lillian, a small, delicate, lugubrious, black-haired woman with skin so translucent, it immediately had me pondering medical conditions. Victoria knew Lillian because Victoria knows everyone. She said, "Darling!" Lillian said, "Darling" back in a tone faint with ennui. Diamonds and rubies glittered on her trim white hands. My aunt said, "This is my niece, Kate McGraw." And Lillian said "Oh?" and proceeded to stare at me so keenly and for so long it became awkward. I wStivers, Valerie is the author of 'Blood Is the New Black ', published 2007 under ISBN 9780307352132 and ISBN 0307352137.